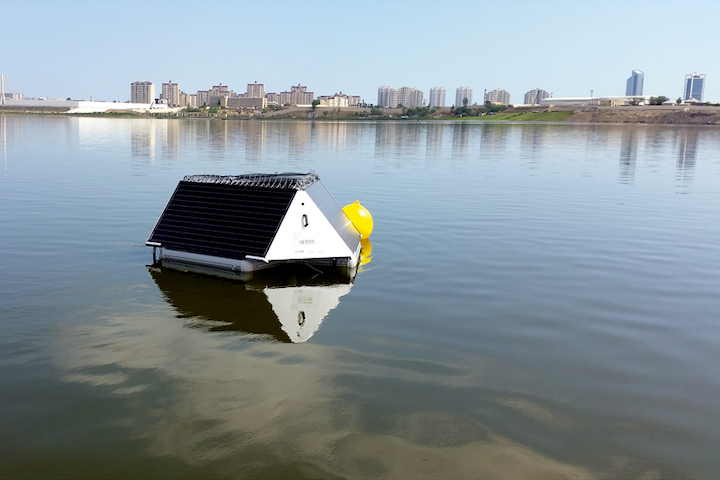 Each MPC-Buoy system has a treatment range of 500 m (1,600 ft) in diameter. All images courtesy of LG Sonic

The use of cooling ponds or canals is an attractive solution for rejecting process waste heat from power generation facilities. Algal blooms, however, may hinder operation of the ponds and the entire facility. There are viable solutions for controlling algae in cooling ponds, subsequently reducing pH, turbidity and biological oxygen demand (BOD) levels.

The water source of cooling ponds differs by facility and often includes either river water or treated sewage effluent. To remove impurities, such as high levels of dissolved solids, from the cooling water, cooling ponds discharge a portion of the cooling water into the environment. This process is commonly referred to as blowdown. The same volume plus the amount of water lost through evaporation is accordingly taken into the system again, which is referred to as makeup. In most countries, organizations such as the U.S. Environmental Protection Agency (EPA) set effluent limitations to control discharge of potential pollutants into the environment. These limits are often site-specific and designed to be protective of the water quality standards of the receiving water.

Parameters subject to permit limits often include pH, BOD, nutrient levels (nitrogen and phosphorus) and turbidity. If the maximum values of these parameters are met, a facility may be forced to secure the blowdown to prevent permit violations. This, however, may increase problems in the ponds even further and can have consequences on the performance and lifetime of the condenser due to increased scale formation. 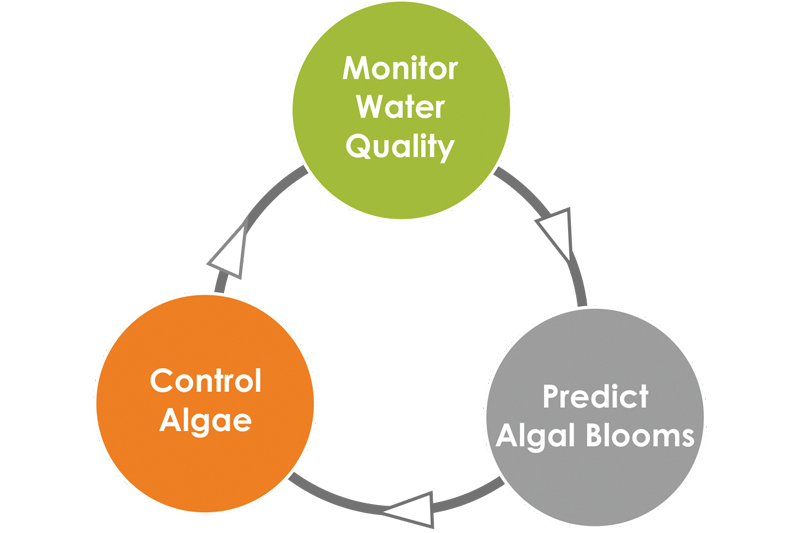 Degradation of the water quality in cooling ponds that leads to excess levels of pH, turbidity and nutrients may be due to different factors. The quality of the source water plays a role as well. When treated sewage effluent is used, the intake water already contains high levels of nutrients and often increased levels of pH and turbidity. Other factors that may result in increased pH, turbidity and nutrients are the chemicals that are added to the water in many facilities. The function of these chemicals is to minimize scaling, inhibit corrosion and control microbial growth. However, they can also adversely affect the water quality in the cooling ponds by directly increasing pH and adding phosphorus to the water.

Cooling ponds are generally shallow, slow-flowing ponds with elevated temperatures. Add to that excess nutrient levels from intake water or chemical use, and the ideal circumstances have been created for algal growth. Through photosynthesis, algae remove carbon dioxide (CO2) from the water, increasing the pH. In addition, the presence of algal blooms also increases the total suspended solids (TSS) and BOD in the water. When algal blooms in cooling ponds cause violation of the discharge permits, blowdown of the plant is suspended, which may increase the severity of the bloom even further.

Algae are a diverse group of organisms that are classified in different kingdoms. Some are eukaryotic, meaning their cells resemble those of plants. Others are prokaryotic, classifying them as bacteria. The latter are also known as blue-green algae or cyanobacteria and can cause severe problems with water toxicity, taste and odor. These toxins can cause various illnesses, such as skin irritation and paralysis, and some are even suspected to be involved in the occurrence of liver cancer. Each year, numerous lakes worldwide are forced to close all recreational use due to the growth of blue-green algae. Governments worldwide must release substantial annual budgets for cleaning measures. In the U.S., freshwater harmful algal blooms (HABs) are conservatively estimated to cost the U.S. economy between $2.2 and $4.6 billion annually.

In order to prevent cooling water from exceeding discharge limits and introducing potential toxic components into the receiving water, prevention of algal blooms is of key importance. Eliminating the phosphorus-containing additives that facilities use for their treatment process may provide some relief. However, it is not always clear how much of the nutrient loading into the cooling water originates from these chemicals. Source water used as makeup water may also introduce nutrients into the system and can result in algal blooms.

Other methods used to control algal blooms are often based on additives, such as aluminum sulfate or other metals that bind phosphorus. These additives, however, are particularly beneficial if no external loads of phosphorus are being introduced into the cooling pond. In the case of cooling ponds, makeup water and phosphorus-containing chemicals may introduce new nutrients into the water continuously, increasing the demand for phosphorus-binding metals. Algaecides such as copper sulfate may control algal growth directly, but the continued addition of makeup water will cause the water to require frequent dosing of the chemical. In addition, algaecides such as copper sulfate may affect nontarget organisms such as fish and zooplankton if the water is discharged.

Another method that is already frequently used in other applications, such as drinking water reservoirs and recreational lakes is the use of ultrasound to control algae. These ultrasonic systems use low-power ultrasonic algae control with specific ultrasonic mechanisms. These do not cause the algal cells to lyse and do not affect multicellular organisms. Algae rely on their buoyancy to float close enough to the water surface to take up sunlight. This allows them to outcompete other organisms in the water — such as plants — that also depend on sunlight intake. Ultrasound fixes algal cells in the water column, preventing them from absorbing sunlight at the surface and thus preventing the algae from entering the blooming stage.

Effective ultrasonic algal control uses different ultrasonic frequencies, which are emitted based on the type of algae present in the water. In addition, ultrasonic programs should also be constantly adjusted to algal growth stages to prevent algal species from becoming resistant to ultrasound. LG Sonic, based in the Netherlands, has conducted more than 10 years of research to identifying the mechanism behind ultrasonic algae control and the effect of ultrasound on specific algal types in different types of water bodies and variations in water quality since 2005. In collaboration with several European universities, the company has created a database defining the optimal ultrasonic parameters for different algal species and water quality characteristics. By continuously updating these ultrasonic parameters, the system prevents algae from becoming resistant to ultrasound.

The company’s MPC-Buoy system automatically monitors, analyzes and predicts algal presence in the water body. To collect water quality data, near real-time sensors are used to measure pH, chlorophyll a, phycocyanin, turbidity, dissolved oxygen and optionally, nitrogen and phosphorus. Based on this information, the MPC-Buoy can determine the presence of different algal species and forecast algal blooms, and then it can automatically change the ultrasonic parameters that it is sending out, which is called interactive algal control. 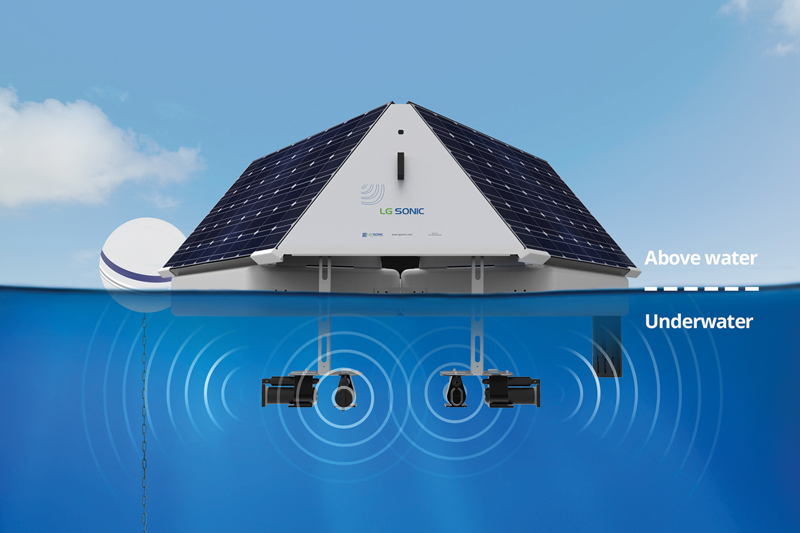 MPC-Buoy systems are being used worldwide for applications such as drinking water reservoirs, recreational lakes, wastewater lagoons and irrigation reservoirs, and they have proven to reduce algae by 60 to 90 percent. For example, the City of Emmitsburg has used these systems to replace the treatment of copper sulfate in its drinking water reservoir. The plant’s chemical costs after system installation were reduced by 27 percent. Other savings related to chemicals included:

Ultrasonic systems are also increasingly used in power plant operations. Sellafield, a nuclear fuel reprocessing and decommissioning site that handles nearly all radioactive waste generated by 15 operational nuclear reactors in the United Kingdom, has performed extensive testing of the systems in its storage basins. One of the main causes of bad storage pond conditions was poor visibility in the water due to algae growth. The plant has reported notable differences in visibility of the pond, with significant reductions in blue-green algae and chlorophyll levels.

For application in cooling ponds, the MPC-Buoy provides a feasible solution. The systems are solar powered and can be anchored in the center of a pond. With a treatment range of 50 acres per buoy, the systems also provide a solution for large ponds and lagoons. 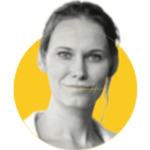 MPC-Buoy combines real-time water quality monitoring and ultrasound technology to predict and control algal blooms effectively.
Lisa Maria Brand is a microbiologist and chief technology officer at LG Sonic, headquartered in the Netherlands. Throughout her career, she has coordinated and collaborated on various national and European research projects that involve freshwater quality analysis and improvement measures. Brand specializes on algal and cyanobacterial issues and their causes.

7 keys to selecting the right solenoid valve for RO systems