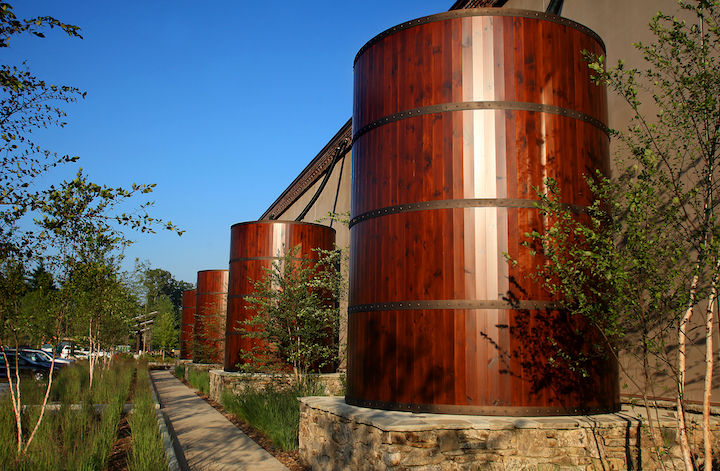 At Sierra Nevada Brewing Company, sustainability is both a cultural and operational philosophy. Since its founding in 1980, the award-winning brewer of beers such as its namesake Pale Ale has committed to limiting environmental impacts while brewing the high-quality beverages it has become known for. Both at its original location in Chico, Calif., and at a second location in Mills River, N.C., the brewer’s efforts include solar panels installed on the roofs of buildings, electric vehicle charging stations, CO2 capture and thermal energy reuse, as well as sustainable farming practices and composting programs at its restaurants. At Mills River, a stormwater capture and reuse program, consisting of 2.58 acres of permeable pavers in its parking lots and 12 rainwater cisterns, diverts excess stormwater.

But Sierra Nevada’s most significant conservation program may be its on-site water treatment plant, which pretreats the brewer’s process water and wastewater effluent, thus improving the quality of the water it sends to municipal treatment plants.

“Our brewery started out of a garage. And then in the mid ’80s, we moved into our current facility, which was at the time much smaller than we are now. And since 1986, we’ve had to be very proactive and build a good relationship with the wastewater utility to make sure that we can continue to operate as we have grown,” Brandon Smith, P.E., engineering manager at Sierra Nevada’s Chico facility said.

“As you can imagine, in a town of less than 90,000 people, they could handle whatever we threw at them [in the early days]. But as we’ve grown over the years — we [currently] have the capacity of almost a million barrels a year in Chico — there is no way a waste treatment plant built for a town of 90,000 people can handle what we could potentially throw at them.”

Smith said without on-site wastewater treatment, the brewery would be subject to surcharges from the local utility and potential EPA fines for exceeding maximum discharge limits. The system has gown alongside the brewery’s; as capacity and treatment needs have changed 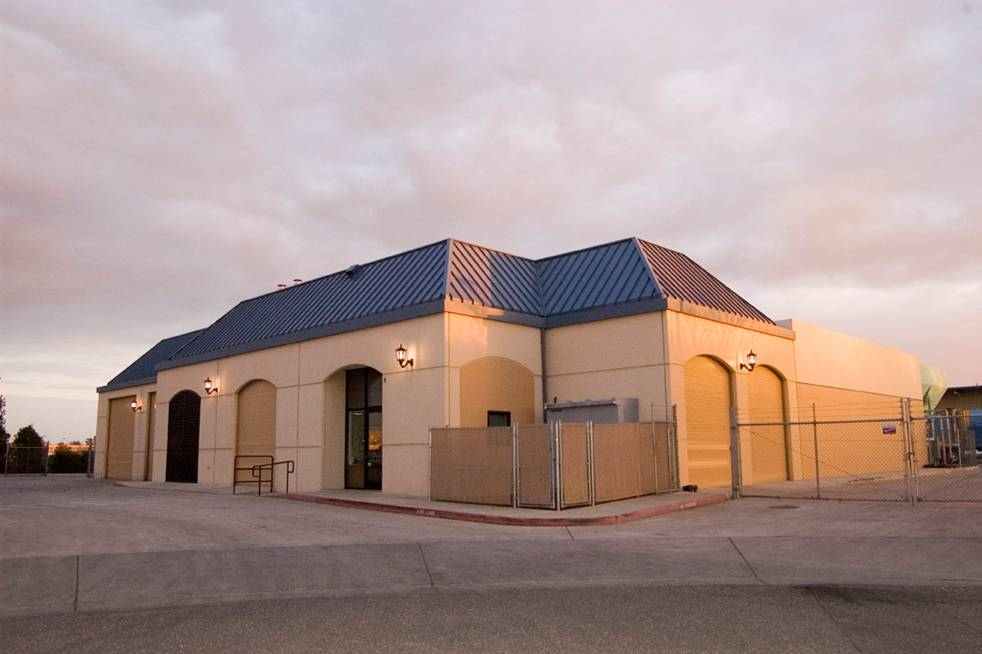 The Chico, Calif., facility was installed in 2002.Sierra Nevada Brewing CompanyThe current system for on-site wastewater treatment was installed in 2000 and consists of solids removal, anaerobic digestion, and aerobic treatment processes. A rotary screen removes the larger solids, which are discharged to a composter. The influent then flows to an equalization tank where it is adjusted for pH and temperature. Next, the influent is pumped into the upflow anaerobic sludge blanket (UASB) digester supplied by Biothane, where it mixes with the anaerobic microbes in a 125,000 gallon tank.

The effluent is pumped out the top of the tank; biogas is piped to a biogas clean-up skid. An aerobic digester, using a fine bubble diffuser, aerates the remaining effluent. In the process, it generates biological total suspended solids (TSS) while removing biological oxygen demand (BOD) and chemical oxygen demand (COD). The clarifiers then remove this TSS in addition to any TSS that entered the aeration basins, settling out any solids still remaining. The system removes over 95 percent of the organic load in the water, allowing the city to easily handle the remainder.

“Like any other raw material supplier, we have to make sure that we’re meeting what the [utility] expects. If they can’t handle our waste, we can’t grow. So, that’s really a lot of what it comes down to,” Smith said.

Shortly after realizing success at its Chico facility, Sierra Nevada began construction on a brewery in Mills River, N.C., in 2002, taking lessons learned from the Chico brewery to complete construction on a two-phase anaerobic sequencing batch reactor (ASBR), designed and built by Symbiont. The Mills River location went online in 2014 and is currently producing about 500,000 barrels per year, though the system can handle up to 700,000 barrels annually. 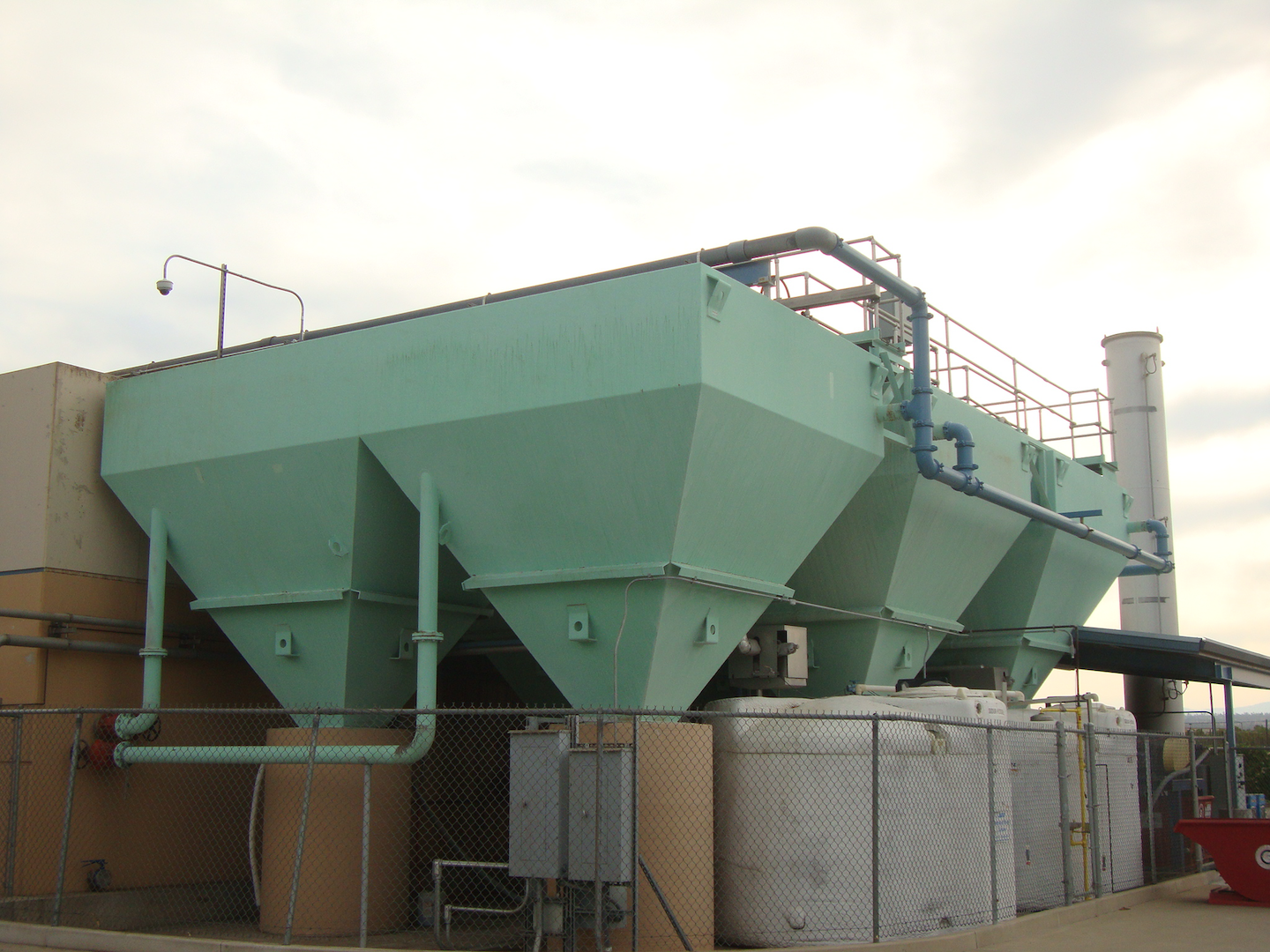 The brewery’s system consists of a 325,000 gallon equalization tank (phase 1), a 1.5 million gallon phase 2 anaerobic bioreactor, and a 155,000 gallon post-aeration tank. The process reduces the volume of solids disposed off site and increases the volume of biogas produced.

“Ideally, the equalization tank is where all hydrolysis, acidogenesis, and acetogenesis occur, while the anaerobic reactor is where our methanogens are making biogas (up to 150,000 cubic feet per day) to feed our microturbines and boilers,” Muston said.

The anaerobic bioreactor, Muston said, is fed for approximately four hours on a 12-hour cycle. For four hours afterward, microbes react in that tank, which is circulating to keep the food in contact with the anaerobic biomass. Afterward, the tank and its contents settle for three hours, and in the final hour of 12, the contents are decanted to the post-aeration tank to be aerated and settled before any remaining solids are removed and returned to the starting point in the process. The final, treated process wastewater is then discharged to the local water utility. 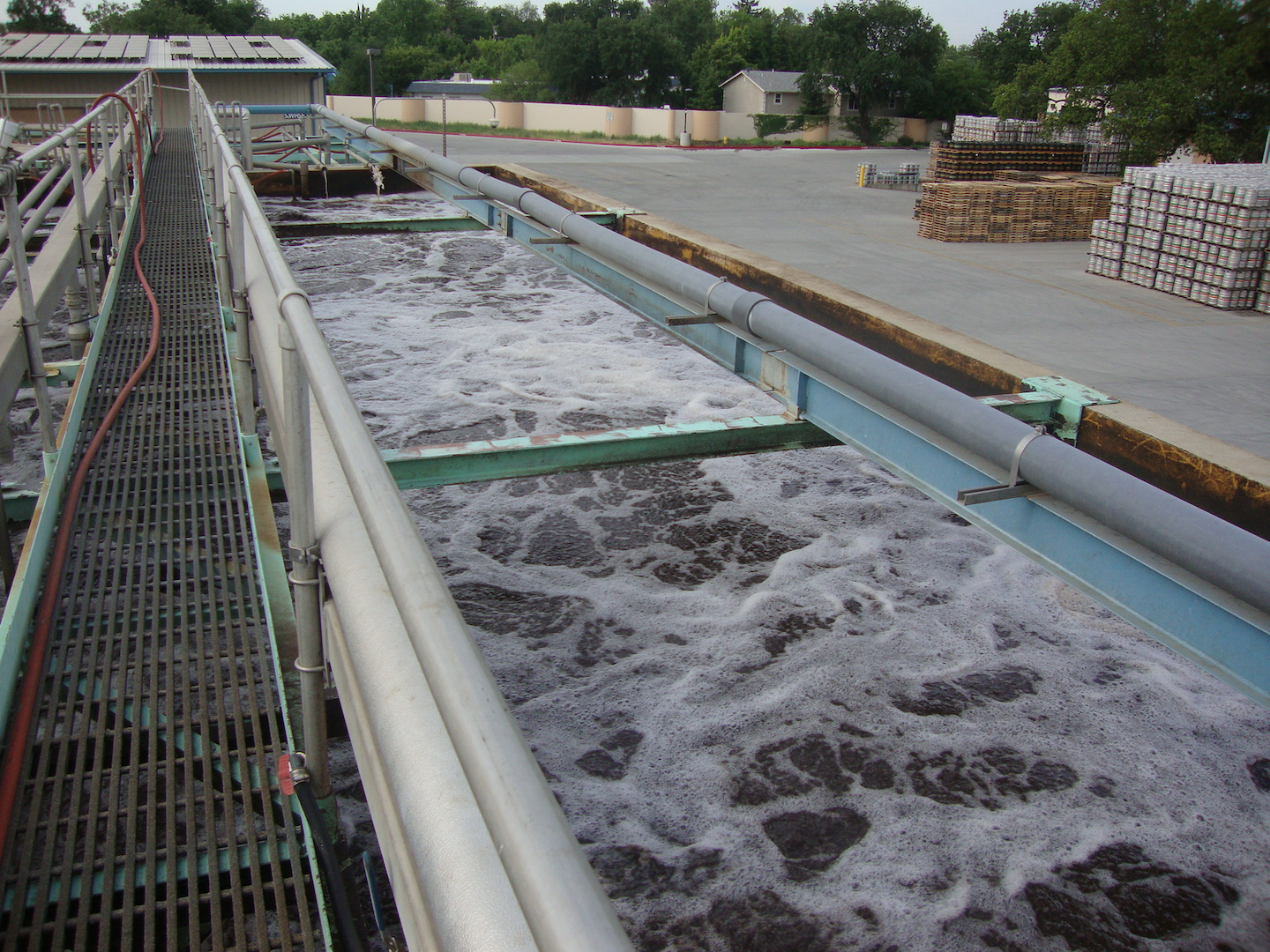 Over 95 percent of the organic load in the water is removed, allowing the city to easily handle the remainder.Sierra Nevada Brewing Company“There are fewer moving parts, so there are fewer maintenance concerns overall with this system than there may be with a continuous stirred-tank reactor or other system. One big advantage is that we don’t use any caustic at all in our treatment process. In five years of operation, we’ve used less than 500 gallons of caustic for pH balancing,” Muston said. 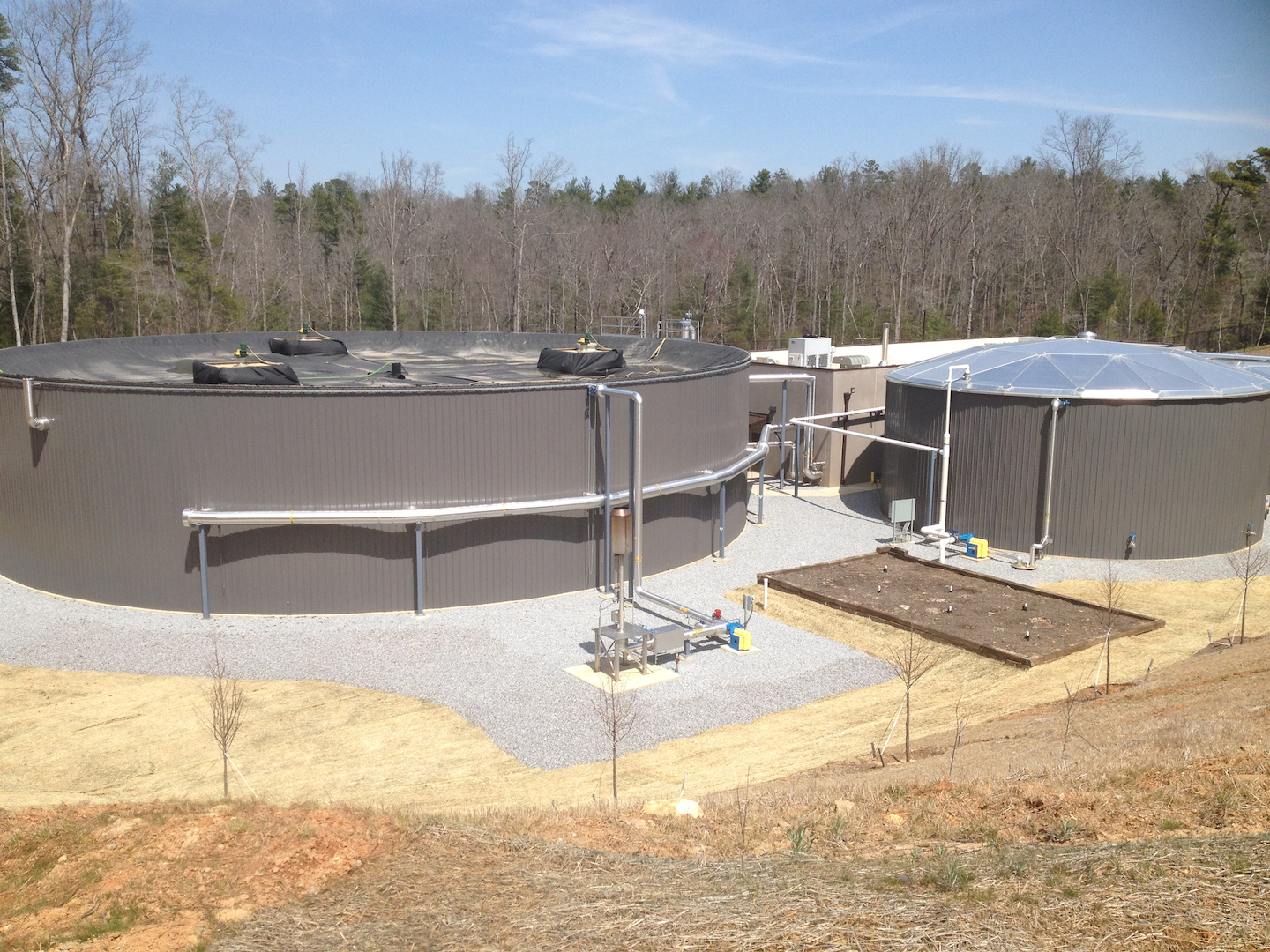 The Mills River, N.C., brewery’s on-site wastewater treatment plant features a two-phase anaerobic sequencing batch reactor (ASBR) designed and built by Symbiont.Sierra Nevada Brewing CompanyAt both of its locations, Sierra Nevada has made water conservation and efficiency a priority, and in more ways than one. In its bottle shops, the brewer has eliminated water-based lubricants on the bottling and kegging lines to reduce consumption levels and decrease the volume of wastewater being sent to its on-site treatment plant. Water used to rinse bottles before filling is recovered and used in the vacuum pumps that dispense beer into the bottles, saving about 2.5 million gallons of water annually at each site.

But effective wastewater management in a brewery is not always so easy, Smith said.

“We have kind of the same challenges that a lot of industrial facilities have, where wastewater treatment is at the end of the line and sometimes the production facility upstream doesn’t necessarily appreciate that. So, it is a challenge to make sure on an ongoing basis that everybody remembers that. You have to be very diligent about considering the effects on wastewater downstream when you do anything,” Smith said. IWW

Brine mitigation for the mining and food and beverage industries

Next Fog Stop alters core metabolism of indigenous bacteria, and its impact equates to a savings on sludge removal at a cheese manufacturer.
Oct 28th, 2019

FOG removal from wash water and wastewater in industrial facilities

A three-phase separation system can separate solids from liquids, as well as fats, oils and grease from wastewater in food and beverage facilities.
Daniel Lakovic
Jul 8th, 2019