Organic waste can generate biogas and electricity that can be sold to the grid or used on-site. It can also result in reduced waste and disposal costs. 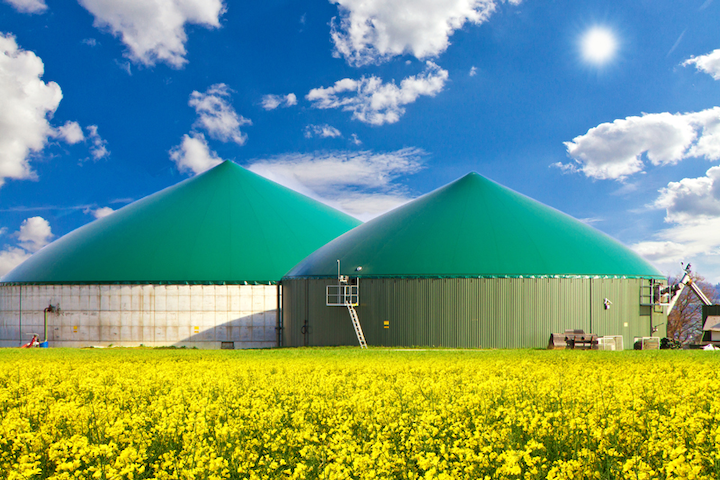 Anaerobic bacteria that thrive in the absence of oxygen are adept at converting organic matter to hydrocarbons by biochemical reduction. Heat, pressure and anaerobes have made those conversions in the earth. That is how underground coal, crude oil and natural gas deposits — formed about 300 million years ago from the buried lush organic biogrowth — have been recently extracted and used for fuels and chemical feedstocks. This process began during the later Carboniferous period, when the atmospheric carbon dioxide concentration was much greater than it is today. Atmospheric carbon dioxide concentrations ranged up to about 1,500 parts per million (ppm) during the early Carboniferous period and declined to about 350 ppm by the middle Carboniferous period. Concentrations were as high as about 7,000 ppm during the Cambrian period, about 200 million years earlier. Oxygen ranged from about 20%, increasing to about 35%, and then declined again to about 20%, as it is today.

Generating fuel gas from anaerobic digestion of organic matter is an old concept, but it is more widely applied worldwide from very small to very large scales. In addition to producing fuel gas that is marketable and usable on-site, it also consumes otherwise not much useful waste materials, reducing disposal costs and regulatory constraints. It also captures methane, a major atmospheric greenhouse gas that is more than 20 times more potent than carbon dioxide on a unit basis. Nitrogen oxides can also be formed and captured, and their greenhouse gas potential is hundreds of times greater than carbon dioxide.

Crude biogas is a mixture of primarily methane and carbon dioxide, plus hydrogen, carbon monoxide, hydrogen sulfide, nitrogen, nitrogen oxides, sulfur oxides, water vapor and other trace substances, including a small amount of oxygen, that are generated by the microbial activity. Biogas is constantly formed spontaneously from decomposing organic carbon and escaping into the atmosphere unless it is captured and controlled. The anaerobic processes are most desired; the amount of oxygen present will affect the distribution of the gases produced. Numerous products can be produced because the complex organic carbon wastes can include sewage, food production waste, manure, brewery byproducts and other wastes that are high in total organic carbon (TOC) and not toxic to the bacteria. The anaerobes are metabolizing a variety of organic chemicals including carbohydrates, lignins and cellulose (to some degree), nitrogenous proteins and other wastes, so they produce several products. Ammonia is also a product; excessive ammonia can have an inhibiting effect on the biological activity.

Commercial biogas is produced in several modes from basic home fermenters to large facilities. Even landfills that spontaneously generate biogas that would normally escape to the atmosphere can be tapped by a negative pressure collection system, thus the gases are collected, cleaned and compressed so sufficient quantities will be available for controlled combustion, just like commercial natural gas. Biogas must be purified to remove most of the undesirable contaminants like carbon dioxide, hydrogen sulfide and water vapor. The most common and low-cost gas purification process is washing with countercurrent water. Most of the nonmethane products are sufficiently water soluble to be effectively removed, and only a small amount of methane is lost because it is nonpolar and not very soluble in water at normal pressures.

East Bay Municipal Utility District’s 60-million-gallons-per-day (MGD) wastewater treatment plant in Oakland, California, converts biogas to enough electricity for its needs and sells the excess electricity to the power grid, saving at least $3 million per year in power costs as well as reduced sewage sludge disposal costs. Oakland began biogas generation to electricity production in 1985 and has expanded output since then. It benefits from the addition of trucked-in food waste like cheese whey, cooking oil and animal products to the sewage treatment plant. The materials are converted to a mush consistency and mixed with sewage treatment solids in anaerobic digester tanks. The addition of the food wastes improves the performance of the bacteria and increases total gas production. The plant produces 11 megawatts (MW) of electricity and consumes only 6 MW. The net effects include: reduced disposal costs for the food waste generators and the sewage treatment plant, significant reduction of solid waste volumes, reduced greenhouse gas emissions and conversion of a waste product liability expense into an income-producing asset.

Oakland’s sewage-to-energy conversion methodology is accessible to many wastewater treatment plants. The amount of gas and energy production is a function of the wastes input and system design. Plants may not necessarily be able to produce saleable excess power unless they also have access to additional biomass from food or farm wastes, but they have the opportunity to cover a portion of their energy production needs and can make a determination as to when the net result is cost effective. 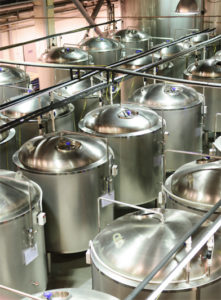 Breweries produce high-strength organic waste from the grains and malt sugars in the brewing process. That waste can produce a variety of products from animal feeds, alcohol from fermentation and biogas from anaerobic digestion. Even small craft breweries are reducing production costs by taking advantage of biogas production to use it as fuel and for generation of electricity and to reduce waste disposal costs. Every barrel of beer produced also produces about 3.5 barrels of high-strength wastewater. Examples of major brewers like Fosters and MillerCoors use waste reduction and gas generation. There are numerous examples of small commercial waste digester applications that are available and cost effective. One example is a small New York craft brewery that reduces wastewater solids by 80% while producing biogas to run a 400-kilowatt (kW) generator that provides 30% to 40% of its electricity needs.

Landfills are accumulations of garbage of all sorts, much of which is being spontaneously decomposed in situ by anaerobic bacteria. Methane is up to 60% of the generated gas. The gases escape to the atmosphere unless they are collected and processed for fuel or electricity generation. It is estimated that landfills are the third largest human source of methane released to the atmosphere. The federal government provides several financial incentives for systems that collect or recover landfill gases. Collection systems can function in closed or open landfills. Vertical or horizontal wells are installed as conduits for the gases that are routed by blowers that reduce pressure, and the gas is transported to collection systems where it is treated and is available for compression and use in burner systems.

Thermal hydrolysis is a more complex pretreatment process for preparing dewatered sewage sludge solids for digestion and biogas production. There are about 45 thermal hydrolysis facilities worldwide, among several processes, and one is in the U.S. (Washington’s DC Water) and another is being built in Dallas-Fort Worth. The sludge is heated under pressure to break colloids and to partially hydrolyze the organic solids so they become more biodegradable. It includes rupturing of cell walls to release more water and ultimately to improve the efficiency of the anaerobic bacterial activity. Steam at about 90 psi raises the sludge temperature to 320ºF (160oC) for at least 18 minutes. The cooled product is fed to digesters where the bacterial action occurs and biogas is produced. An additional benefit is that the process produces sterilized nutrient-rich marketable Class A biosolids suitable for agricultural and garden applications. At DC Water’s more than 300-mgd advanced wastewater treatment facility, the process costs several hundred million dollars and it replaces a high lime process that produced about 60 truck loads per day of wet biosolids that had to be land applied or disposed. DC Water generates about 10 MW of power, which is about one-third of its energy consumption.

The old concept of waste-to-energy conversion is being widely adopted because it can be cost effective by converting a once-to-be-disposed organic waste stream into an asset that generates biogas and electricity that can be sold to the grid or used to generate usable heat and electricity on-site. In addition, it can result in reduced waste volumes and reduced residual disposal costs, or even other direct financial benefits by providing saleable credits for greenhouse gas reduction. Municipal and smaller sewage treatment plants are obvious opportunities, as well as any generator of organic waste from farms, vegetable and meat production and canning processers, breweries, cheese producers, waste cooking oils and more. Blends of wastes often improve the gas production per unit. The benefits are worth considering for any such waste producer or waste processor whose waste stream is not toxic to the anaerobes.

Joseph Cotruvo, Ph.D., BCES, is president of Joseph Cotruvo and Associates LLC — water, environment and public health consultants — and he is a technical editor of Water Technology. He is a former director of both the EPA Drinking Water Standards and the Risk Assessment Divisions.

Brine mitigation for the mining and food and beverage industries

Next Fog Stop alters core metabolism of indigenous bacteria, and its impact equates to a savings on sludge removal at a cheese manufacturer.
Oct 28th, 2019

FOG removal from wash water and wastewater in industrial facilities

A three-phase separation system can separate solids from liquids, as well as fats, oils and grease from wastewater in food and beverage facilities.
Daniel Lakovic
Jul 8th, 2019