At the University of Illinois at Chicago, much progress has been made toward improving water/steam chemistry over the last decade, with additional efforts ongoing. This article outlines several of these improvements and some of UIC’s future goals. 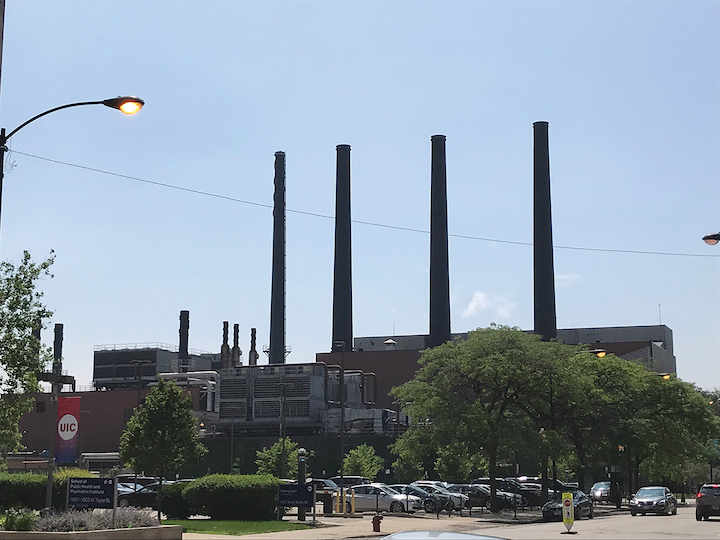 The West Co-Gen Plant at the University of Illinois at Chicago (UIC) produces heating steam for the west side of the college campus, including approximately 50 buildings and the university hospitals (UIC and Rush). It also generates chilled water for the west campus and the UIC hospital. The original mindset was “water is water,” with minimal treatment utilized for normal operation. However, as numerous plant owners and operators have discovered, often to great regret, if plant makeup and process waters are not treated properly to remove impurities and optimize chemistry, severe corrosion, scaling, and fouling are the result.

UIC, founded in the late 19th century, has an enrollment of nearly 30,000 students and operates the largest medical school in the country. Such an extensive campus and medical facilities require substantial quantities of steam for heating and chilled water for cooling. For many years, steam at the West plant was produced by six 1950s-era Babcock & Wilcox boilers.

Three of these boilers have been retired in place, but the other three are still operational. The plant also has a five-year-old Victory boiler (180,000 lb/hr steaming rate maximum) that helps to supply steam capacity and backup capabilities during the cold winter months in Chicago.

Two decades ago, the plant moved to co-generation with the installation of three solar gas turbines, each capable of 7-MW power production. The turbine exhaust gases power three heat recovery steam generators (HRSGs). During normal operation, each HRSG can produce 30,000 lb/hr of steam, but the steaming rate can be increased to 120,000 lb/hr with duct firing.

Co-generation offers much higher net efficiencies than stand-alone steam production, and is becoming increasingly popular for many applications.1 Superheated steam (430°F to 450°F) at 143 to 145 psig is provided to an inlet header, which then feeds the distribution lines to the campus. Much of the condensed steam is recovered, with a maximum condensate return of around 85 percent.

Many challenges have arisen in keeping the UIC steam and chilled water systems operating reliably, especially given the age of the facility. Beyond that task though, plant personnel are striving to upgrade system design and performance from those days when a “water is water” mindset at least partially prevailed. The next sections outline these efforts.

High-pressure utility steam generators require very pure makeup, as even small concentrations of impurities can cause severe corrosion and deposition. However, for the original UIC boilers, and many similar units around the country, less pure water often served as makeup due to lower heat fluxes and temperatures in the steam generators.

A very common arrangement was raw water feed from a city water supply with sodium softening of this makeup. The remaining impurities, including alkalinity, chloride, sulfate, and other compounds entered the boiler directly. And indeed, documents developed by the American Society of Mechanical Engineers (ASME), American Boiler Manufacturers (ABM), and others provided guidelines on allowable levels of impurities in boilers at various pressure ranges. For example, at an operating pressure range of 0 to 300 psig, ASME guidelines suggest, among others, the following limits or ranges:

But operating under these conditions had several major drawbacks. Any softener upsets that allowed leakage of hardness presented opportunities for scale formation. Thus, most boiler water treatment programs included phosphate to mitigate (but not necessarily eliminate) scaling issues. Waters high in conductivity or silica limited boiler cycles of concentration, which in turn required much blowdown.

Heavy blowdown can be especially problematic on boilers with little condensate return, where the makeup provides most of the boiler feed. Many systems were equipped with some form of decarbonator, and the old UIC West system had one to reduce alkalinity via conversion to and extraction of carbon dioxide. Unfortunately, age often degrades performance of these units.

With the development of reliable membrane technologies, most notably reverse osmosis (RO), an economical solution to these problems exists, and the UIC staff has taken advantage of it. The makeup system has been equipped with single-pass RO that removes greater than 90 percent of the dissolved impurities from the raw makeup, which is treated water from the City of Chicago. This upgrade has provided several important advantages, including:

• Removal of a common source of hardness breakthrough in the old, manually regenerated ion exchange units.

• Increase of boiler cycles of concentration from 10 to 50, thus reducing blowdown.

• Reduction of alkalinity in the boiler water. Alkalinity will decompose under heating to produce carbon dioxide (CO2), which carries over with steam. When the steam condenses, the CO2 introduces acidity to the condensate that increases the potential for carbon steel corrosion. Very common, and as is being done at UIC West, a small caustic feed ahead of the RO ensures that CO2 is converted to bicarbonate ions (HCO3-), and thus does not pass through the RO membranes.

• Conversion of boiler water treatment from phosphate to polymer chemistry.

The latter adjustment has proven to be very beneficial, as the following photos indicate. 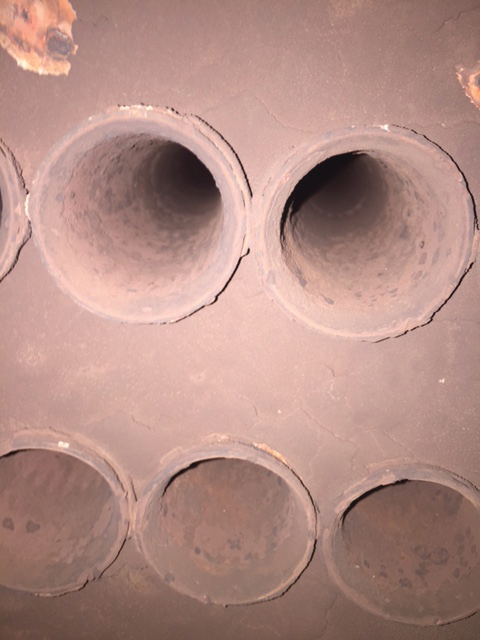 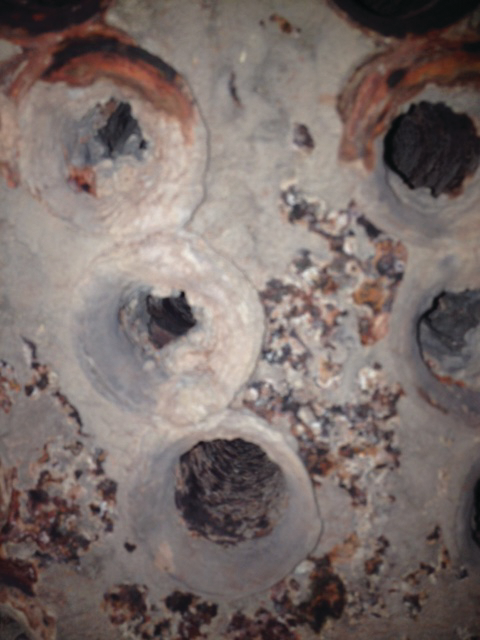 While phosphate programs have been used for decades to protect boilers, the treatment relies on deposition chemistry as a prime method of control. The upgrade at the West Co-Gen Plant to RO for makeup water treatment has allowed flexibility in moving from phosphate to polymer-based chemistry that does not produce deposits.

In addition to installation of the new co-generation units, other performance enhancements have been implemented within the steam generation system. This includes repair and replacement of broken spray nozzles and trays in the feedwater de­aerators, and installation of new dissolved oxygen instruments to accurately monitor deaerator performance.

Condensate return is very important with these large systems as it allows recovery of volumes of water that would otherwise have to be produced by the makeup water system. However, condensate recovery offers many chances for the water to pick up impurities that could damage the steam generators. At another organic chemicals plant that had no condensate return treatment, residual organic compounds in the condensate induced foaming in four boilers, which in turn caused frequent superheater failures that required regular superheater bundle replacement.

An additional part of the effort regarding steam production and condensate return control involves improved coordination among the various engineering staffs at the facility to identify and repair problems such as malfunctioning steam traps, heat exchanger tube bundle leaks, and other leaks in general. In any situation like this, with miles of steam piping and condensate return, the system must be viewed holistically. A problem at one end that may seem to be minor can have a drastic influence somewhere else in the system.

Additional performance improvement projects are on the drawing board for the UIC plant. One is better monitoring of carbon steel corrosion rates in the condensate/feedwater systems of the steam generators. A problem that has plagued high-­pressure steam systems for decades but is still overlooked by many is that of flow-accelerated corrosion (FAC). Space limitations prevent a detailed discussion of FAC in this article, but the mechanism can cause iron loss in specific locations until the pipe or tube wall becomes so thin that the material ruptures. Safety is obviously a very important factor in such situations.

An upgraded feedwater header control system is in place to improve performance and reduce past economizer steaming problems. Also, modern chemical feed control systems are in place to produce and maintain the proper chemistry in the boiler/HRSG feedwater systems and the boilers themselves. This includes ensuring that steam chemistry meets U.S. Department of Health standards, given that steam is utilized in two hospitals.

Also, some hydroblast cleaning has been performed on the HRSG internal tube surfaces, which has improved heat transfer. Chemical cleaning is being considered for the HRSGs and for two of the older boilers, but such decisions must be made carefully. Boiler chemical cleaning is a complex process for any unit and can be quite complicated in HRSGs. Early coordination with a reputable chemical cleaning vendor is critical for successful project preparation and completion.

In systems similar to this at UIC, often the most common problem is corrosion of carbon steel condensate return piping that generates iron oxide particulates which cycle back to the steam generators. The UIC staff has addressed these potential difficulties by two methods. First, feed of a neutralizing amine has been implemented to maintain a moderately basic pH that minimizes corrosion. Secondly, the system includes condensate polishers to remove impurities before they can enter the boilers.

Unfortunately, far too often polishers are eliminated from plant design specifications because doing so represents an easy method to reduce (usually only slightly) capital costs for the project. This thinking is very shortsighted, as the benefits from minimizing impurity ingress typically far outweigh the bit of additional expense.

While the effects of FAC are typically not as severe in lower-­pressure systems, the issue should not be overlooked. A key concept for evaluating FAC and other steel corrosion mechanisms is regular iron monitoring of the feedwater. This can be done by grab sampling or with online instrumentation but should be done regardless of the technique. UIC personnel are addressing this issue even as this article goes to print.

Increased examination of the chilled water circuits is also in the works. A common tendency is to neglect these systems, as they obviously operate at much lower temperatures than steam networks. However, no system is immune to corrosion, and neglect can lead to minor problems becoming major issues. For example, a leak that develops in a closed cooling water system requires increased makeup water feed. This in turn can lead to enhanced ingress of corrosive agents such as oxygen. Chemistry control becomes more and more difficult. In some cases, it may become impossible to maintain the proper treatment chemical residual(s) in the cooling water. IWW

Author’s note: A special acknowledgement goes to Scott Freymark, ChemTreat (ret.), who was instrumental in facilitating the upgrades outlined in this article.

About the Authors: Brad Buecker is senior technical publicist with ChemTreat. He has 36 years of experience in or affiliated with the power industry, with nearly two decades of it in steam generation chemistry, water treatment, air quality control, and results engineering positions at City Water, Light & Power (Springfield, Ill.) and Kansas City Power & Light Company’s La Cygne, Ks. station.

Nigel Mohammed has 20 years of water treatment experience and technical consulting. He has been involved with numerous activities related to high- and low-pressure boiler water treatment, waste heat boilers, chemical feed automation, softeners, reverse osmosis, and ion exchange. He has a B.S. in chemical engineering from the University of Illinois at Chicago.

Frank Murphy is an assistant chief engineer at UIC’s West CoGen Steam Plant. He has 40 years of experience in steam plant operation, beginning as a boiler technician in the U.S. Navy and including more than a dozen years in the power industry at Boyle Energy Services and Technology Inc. performing pre-commissioning services, including hydrostatic testing, chemical cleaning, steam blows, etc.

2. Consensus on Operating Practices for the Control of Feedwater and Boiler Water Chemistry in Modern Industrial Boilers, The American Society of Mechanical Engineers, New York, NY, 1994.