A first in Asia, Grundfos’ Distributed Pumping System is a novel system capable of operating in optimized conditions at any time. 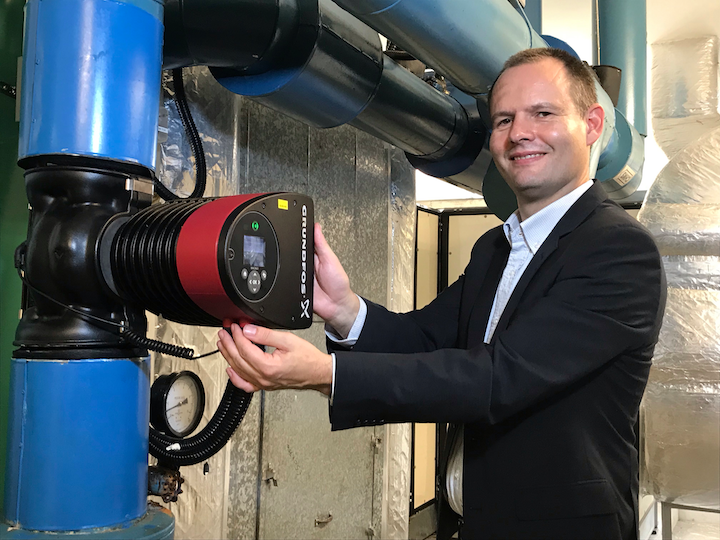 SINGAPORE, SEPT 17, 2019 -- Rising temperatures across the world has cast a spotlight on the need to provide cooling in cities without overburdening urban power grids and in turn further contributing to climate change. In response, Grundfos has launched its Distributed Pumping System in Asia, which aims to help air-conditioning systems consume up to 50 percent less energy than current conventional methods.

Conventional systems often use up a high level of energy due to issues such as over-pumping to compensate for discrepancies between the chilled water supply and return temperatures. In addition, they have the tendency to run at constant speed and pressure throughout its operations, regardless of fluctuating cooling demands. The systems’ high energy consumption ultimately contributes to greater carbon emissions, driving climate change.

A first in Asia, Grundfos’ Distributed Pumping System is a novel system capable of operating in optimized conditions at any time. It achieves this by intuitively regulating the water flow based on feedback from temperature sensors, meeting the exact requirements of different building zones, and intelligently controlling energy consumption by delivering the right flow at all times. On top of reducing energy consumption and operational costs, this new system achieves comfort for users of the building by ensuring a consistent building temperature at all times.

This revolutionary approach to optimum water distribution is made possible by Grundfos’ MAGNA3 and TPE3 pumps – both ranges feature compact, intelligent circulator pumps fitted with built-in sensors, variable speed drive, controller and communication module, and state-of-the-art IE5 motors ensuring the highest efficiency. TPE3 is a dry-runner, vertical, in-line pump used as the primary pumps, while MAGNA3 is a wet-runner circulator used as the secondary pumps.

The self-balancing nature of Grundfos’ Distributed Pumping System also means that control valves are not required, removing the need for tedious and time-consuming balancing which also reduces the costs of the initial installation.

With the Paris Agreement goals to limit the global temperature increase to 1.5 degrees Celsius, Grundfos Asia Pacific forecasts that the demand for distributed pumping systems will increase in the coming years as a result of greater demand for energy efficient solutions.

Anders Christiansen, Regional Business Director, Building Services for Grundfos Asia Pacific said, “Cooling and ventilation has become a part of everyday life and for the warm, tropical regions of Asia, it is especially pertinent in making cities habitable. However, conventional cooling is not sustainable in today’s climate crisis – growing demand for air conditioning alone in the world’s emerging economies will drive a 64 percent increase in household energy use and produce 23.1 million tonnes of carbon emissions by 20401. With sustainability being a very key part of Grundfos’ DNA, our Distributed Pumping System demonstrates our commitment to create cleaner and more energy efficient technologies to enable our customers to reduce their energy consumption and limit their impact on the environment.”

The high-performing energy efficiency demonstrated by Grundfos’ Distributed Pumping System has been recognized in two sustainable cooling projects, which reported that the novel system is able to achieve significant pump energy savings, a significant reduction in energy consumption and operational costs for businesses.

The first project is at Grundfos’ Asia Pacific headquarters here in Singapore, which consists of an office and factory block. Over a period of 7.5 months from November 2016 to May 2017, the building achieved 55 percent pump system kWh energy savings.