The study will research a method to reduce the amount of salt collected from industrial cooling tower blowdown from entering municipal sewer systems. 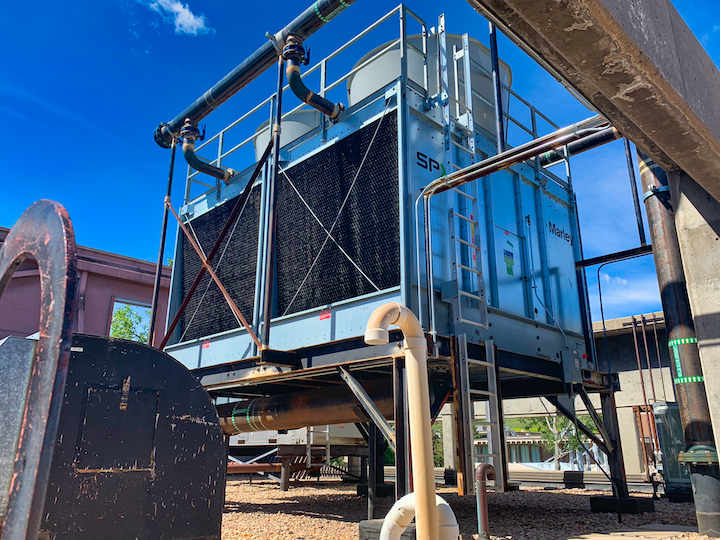 The Garver-led study that will research a method to reduce the amount of salt collected from industrial cooling tower blowdown from entering municipal sewer systems was recently awarded one of seven grants issued under the BOR’s Desalination and Water Purification Research Program. Garver’s water technology experts and RRCC staff and students will work alongside Dr. Mike Mickley, an internationally recognized brine-management expert, to evaluate the effectiveness of a 1 gpm electrocoagulation, ultrafiltration, granular activated carbon, and reverse osmosis treatment train aimed at preventing high-salinity cooling tower blowdown from entering sewer systems.

The permeate will be sent to a nearby greenhouse for irrigation supply, and to be recycled back to the cooling tower recirculation water. The reverse osmosis concentrate will be treated with vacuum-assisted electrodistillation, which will generate an 80 percent salt slurry that is expected to be 95 percent sodium chloride. This salt slurry will be evaluated as a potential feedstock to the chlor-alkali industry, which can turn it into chemicals traditionally used in cooling tower recirculation water treatment such as hydrochloric acid and sodium hypochlorite.

“Our zero liquid discharge, membrane desalination treatment train is estimated to remove more than two tons of salt from the 600-ton RRCC cooling tower blowdown over the eight-month field-testing portion of the pilot study,” said Garver Water and Energy Practice Leader Eric Dole, PE, PSAP. “The reduction of salt discharge to the sewer will benefit the local wastewater treatment plants and the local watershed, while also improving the efficiency of cooling towers with a low energy intensity treatment train that may generate a by-product used to help support a circular economy.”

It will also prove the efficacy of using this unique treatment for saline water sources of similar water quality, such as inland desalination, while researching by-product markets for the waste salt slurry generated from the system.

Dole projects the treatment train could eliminate 4.8 million gallons per day (mgd) of blowdown that would otherwise enter the sewer systems along with 4.8 mgd of potable water used for makeup water.