When complaints about odors from a bottling plant’s wastewater facility grew, plant operators looked to Anue Geomembranes’ odor covers for a solution. 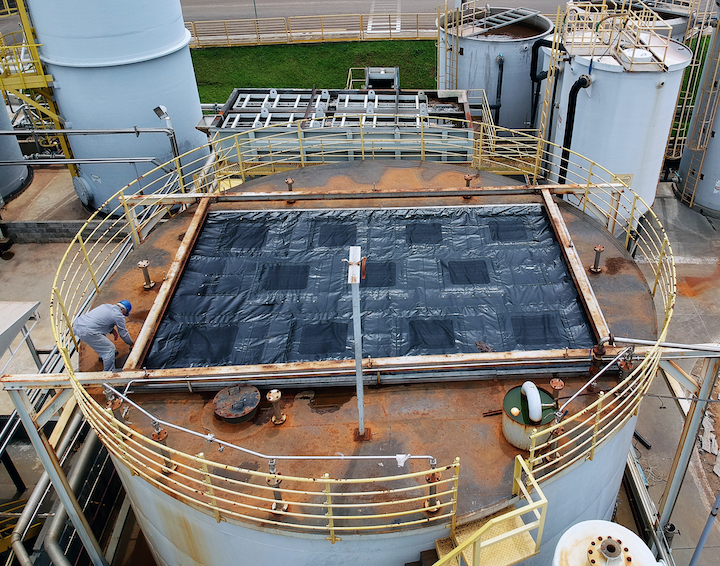 About a five-hour drive from São Paulo, Brazil, lies the quiet town of Marilia, with a population of 230,000 residents. Marilia is also home to one of Brazil’s largest bottling plants. It belongs to FEMSA, the bottler for one of world’s largest soft drink manufacturers.

In 2017, complaints about odors from the FEMSA plant’s wastewater facility were being received more frequently — in particular from a neighboring hotel. Around the same time the odor complaints were piling up, plant operators were also looking to improve the safety of the wastewater tanks and investigating any cost-saving practices that could be implemented.

The manufacturer’s head office in Mexico City already had several successful installations of the Anue Geomembrane odor covers (known in Brazil as PODZ Horizon) at other wastewater facilities across Latin America, including bottling, dairy and juice plants. The Mexico City office recommended to the Marilia plant management that they consider installing the same system to address the plant’s challenges all at once.

The wastewater plant in Marilia had two rectangular reactors with existing rigid covers that were still emitting odors — despite using costly odor-reducing chemicals. The FEMSA plant manager decided to install the Anue Geomembranes reinforced odor control system with integrated activated carbon filters on the two reactors. At the time when these improvements were implemented, a new glass-lined steel homogenization tank was going to be built, and it made sense to also cover it with the Anue Geomembranes solution.

The covers, which are suspended above the liquid, are made to fit each tank perfectly, providing a tight seal around the edges that ensures all gases are forced toward the filters. One major advantage that plant management considered when choosing the Anue Geomembranes for the new and existing tanks was the “breathability” of the carbon filters. The porosity of the filters prevents pressure from building up below the covers and the subsequent creation of dangerous gas build-up in confined spaces — a key safety feature.

To facilitate the operation and maintenance of the basins, access ports were included in the design for each membrane according to the customer’s specifications.

There was an immediate change once the covers were installed; no longer were any odors detected from the reactors. And, because the homogenization tank had the covers pre-installed before it was commissioned, at no time were any discernible odors recorded. Odor complaints from the neighboring hotel and community ceased completely once the Anue Geomembrane system was installed.

The streamlined structure of the cover system integrates the activated carbon filters within the reinforced membrane in “pockets” for easy maintenance and filter changing. As a result, one of the additional benefits enjoyed by the wastewater facility was the potential liberation of physical space occupied by pipes, pumps, and the chemical dosage unit since they were no longer needed.

Apart from having solved its odor problems, perhaps the most important advantage the customer received was a quick return on its investment. Having eliminated the use of odor control chemicals, the wastewater facility managed to cover the cost of the three Anue Geomembrane odor control covers and the installation for the equivalent of what it would have spent on the use of chemicals in a six- to eight-month period.

The only operating expense required with the new odor control system consists of changing the activated carbon filters on a regular basis. In this particular case, the first filter change was done at the 10-month mark. One filter change (every 10 months) is equal to 2.5 weeks’ worth of chemicals the facility used to consume. Another monetary advantage are the cost-cutting benefits resulting from the reduction of energy consumption related to operating an air scrubber as well as associated labor and maintenance.

Based on practical experience in a variety of industrial and municipal wastewater plants, the average life span of the carbon filters is about 9–15 months, depending on the type of gases emitted, intensity, flow, etc. Some wastewater facilities do sporadic checks with manual gas detection equipment, others even invest in olfactometric analysis. But if there are no regulatory or other mandated requirements to use instruments for scientific odor monitoring, the easiest and most common method for determining when to replace the filters is simple — the staff at the wastewater facility will detect a gradually increasing odor level, indicating the time has come for a filter change. Unless the facility changes the treatment processes, plant staff will have a good idea after the first filter change of what filter-changing cycle to plan for.

By early 2020, the three Anue Geomembrane covers will have been installed for two years and they will have endured a hot climate and sustained the torrential rainy season, thanks to the carbon filters that additionally function as water drains.

With a payback of less than one year, a massive reduction in operating cost, and a decrease in greenhouse gases and energy usage in line with FEMSA’s sustainability objectives, the Anue Geomembranes have kept the odors under control and the soft drink facility free from complaints. IWW