A California water company reaps the benefits of both. 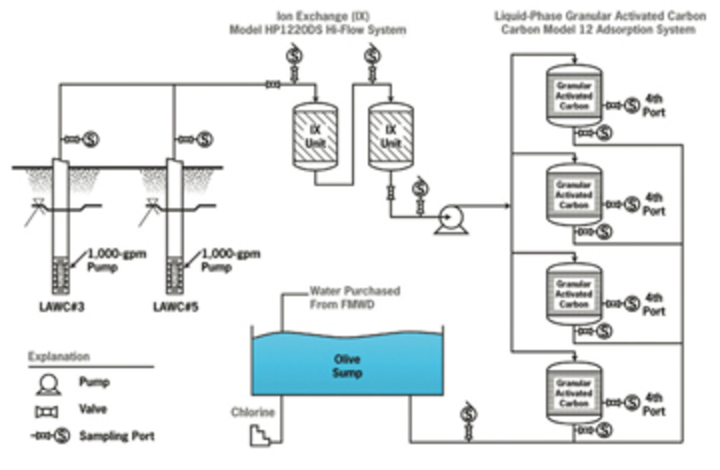 In the summer of 2011, the Lincoln Avenue Water Company (LAWC) in Altadena, Calif. was confronted with a significant increase in the cost of virgin activated carbon, the plant’s primary groundwater treatment media. Two years later — after thorough pre-testing and a graduated switch to reactivated carbon — LAWC has cut its activated carbon costs by 20 percent without any sacrifice in water quality.

From ranches to missile ranges

Located in the foothills near Pasadena, LAWC has been in operation since the late 1890s with primary origins as an irrigation cooperative for local citrus groves and ranches. In the early 1900s, when the area’s population started to boom, LAWC began to take on the functions of a traditional water utility to meet the demands of a growing community. The company drilled its first groundwater well in 1913. By the 1970s, LAWC was drawing water from two active wells while operating 11 reservoirs.

In 1984, testing discovered harmful contaminants in the groundwater, largely due to the plant’s proximity to the Jet Propulsion Laboratory (JPL) and the active wells were shut down. Eight years later, LAWC installed a liquid–phase granular activated carbon (GAC) adsorption system to treat the contaminated groundwater. In 2004, an ion-exchange system was added to the treatment process to combat high concentrations of perchlorate. The Los Angeles County system was the first to be approved by the California State Department of Public Health.

Today, LAWC supplies water to 16,000 residents of West Altadena through 4,500 service connections. The plant has an operational capacity of 5.18 million gallons per day (mgd). In addition to groundwater drawn from two deep-water wells in the Raymond Basin, which are its primary sources of water, LAWC operates a surface water treatment plant and imports water from the Foothill Municipal Water District, a member agency of the Metropolitan Water District.

Well water contaminants include trichloroethylene (TCE), carbon tetrachloride (CTC) and tetrachloroethylene (PCE), along with the aforementioned perchlorate. They are residual volatile organic compounds (VOCs) from seepage pits that were used by JPL to dispose of chemical waste during missile testing in the 1940s and 1950s. The pits were replaced by a sewer system in the late 1950s, but it was too late to prevent contamination by the remnant chemicals.

LAWC’s treatment operation is funded by NASA with regulatory oversight by the California Department of Public Health, California Regional Water Quality Control Board and the federal Environmental Protection Agency (EPA).

The second testing protocol was the WaterAds Adsorption Model. This assessment tool uses TACTIC computer modeling to identify the “fingerprint” or “adsorption curve” for single carbons in tandem with Polyani adsorption theory to calculate loading and use rates based on pre-stated contaminant concentrations.

As Figures 2 and 3 demonstrate, WaterAds modeling revealed the following:

Figures 2 and 3 show the predicted performance of the CMR and virgin OLCs according to “average” and “actual” influent contaminant concentrations found in the LAWC feed-water. The contaminant profiles are listed in the table below:

For the third procedure, the team employed CRTC testing, which is similar to WaterAds modeling because of its use of TACTIC adsorption profiles for single carbons. Using this method, they classified influent VOC concentrations from LAWC groundwater according to the two general application profiles highlighted in Figure 4. It then compared the test results for the CMR and virgin OLCs specifically formulated for LAWC.

As with WaterAds modeling, it was determined that the CMR OLC would perform 90.1 to 98.6 percent as effectively as the virgin OLC, depending on which of the two contaminant profiles was used.

Based on the WaterAds modeling and CRTC testing, the team recommended that LAWC install a coconut–based, 12×40 CMR OLC with 20 percent virgin make–up to achieve at least 90 percent relative performance to virgin OLC. 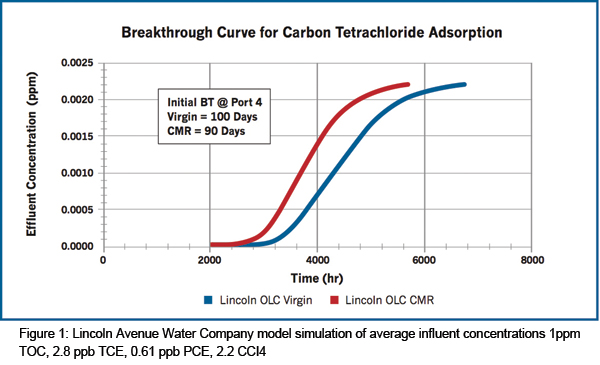 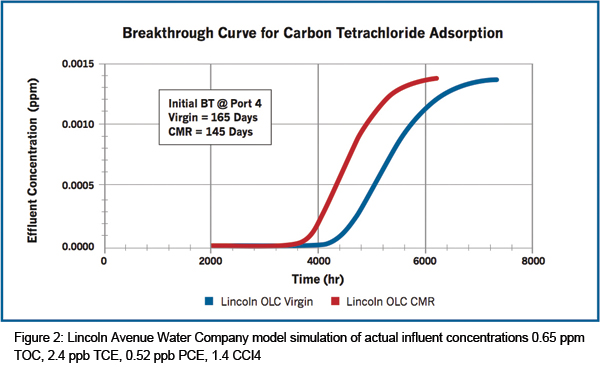 From the lab to the field

Based on test results from ACT, WaterAds modeling and CRTC testing, the facility’s veteran general manager Bob Hayward approved the conversion of LAWC’s first GAC adsorber from virgin OLC to CMR OLC in early 2012. As proposed, the CMR OLC is a coconut–based 12×40 mesh with a maximum virgin OLC make–up of 20 percent. All OLC used at the plant is sequestered and reactivated.

Nearly two years into the change-over, Hayward and his assistant, Jennifer Betancourt, LAWC’s water quality control coordinator, have continually monitored system performance. She reports that, so far, the results have been even better than expected.

“We’ve experienced about a zero percent drop in the cost-per-change-out and there has been absolutely no change in the quality of our water,” Betancourt explains.

“Overall, we are very pleased with everything,” she adds. “The plant is meeting all the goals established by the company and we’re providing our customers with safe, reliable drinking water at the most economically feasible cost. The treatment facility allows us to produce our own local water and defer the purchase of expensive imported water.”

Groundwater at LAWC is treated with four 20,000 pound GAC adsorbers that run in parallel to provide a total treatment capacity of 3,600 gallons per minute (gpm). Influent flow control valves ensure equal flow to each vessel. The parallel systems are monitored for TCE, CTC and PCE at the fourth-side sample port of each adsorber vessel, which represents about 75 percent (or about 15,000 pounds) of the stored GAC. Empty bed contact time (EBCT) is seven minutes. The presence of any of the aforementioned VOCs in the fourth side sample port triggers a change-out, which ensures that the final effluent water remains in compliance. 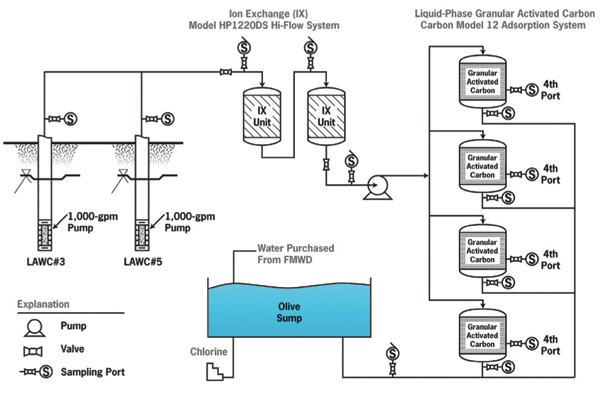 When LAWC was first approached about converting to a custom municipal reactivated carbon, Hayward?was skeptical about its potential performance. While he was willing to adopt leading-edge treatment methods?to promote greater sustainability at LAWC, Hayward wanted reliable evidence that the proposed formulation would work effectively before he consented to a real-time trial. He also wanted a reasonable guarantee of performance if LAWC ultimately agreed to make the switch permanent.

Measures were taken to satisfy Hayward’s concerns. The result was a mutually developed and approved comprehensive testing, trial and implementation program to predict the performance of the proposed reactivated carbon and to verify that it would, at the very least, maintain the performance standard established by the incumbent OLC.

In August 2011, three separate testing protocols were initiated to demonstrate the viability of the proposed carbon: