POU and POE treatment options are available for citizens who prefer to remove this from their water. 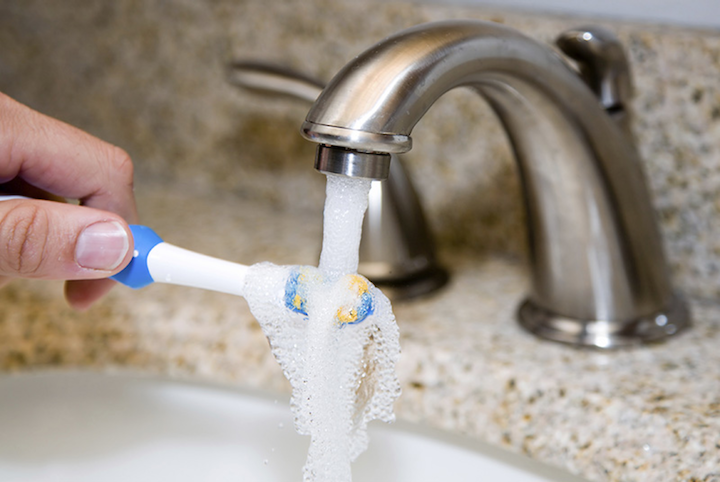 Fluoridating public water supply generates controversy throughout the world. Fluoride can be ingested through foods that are processed using fluoridated water, fluoridated toothpaste, and even drinking black and green leaf tea (mature tea leaves contain as much as 10 to 20 times the fluoride levels of young leaves from the same plant),10,11,12 but perhaps the largest contributor to human fluoride intake is fluoridated water supplies.

Fluoride is the simplest anion of fluorine. Its salts and minerals are important chemical reagents and industrial chemicals, primarily used to produce hydrogen fluoride for fluorocarbons. Fluoride ions resemble the hydroxide ions in charge and size, and they occur in several minerals, particularly fluorite. In water they are only present in trace quantities. The soft, colorful mineral boasts a distinctive bitter taste but adds no color to fluoride salts.

Anti-fluoridation efforts have been increasing throughout the U.S. in recent years. If desired, communities can remove fluoride from water through properly designed and maintained water filtration equipment. Equipment can be installed in areas with fluoridated public water supply or with private wells that have naturally occurring fluoride in the water.

The water fluoridation controversy arises from political, moral, ethical and safety concerns in public water. While some countries, particularly in Europe, have ceased water fluoridation, the controversy persists in others. Those opposed argue that water fluoridation might cause serious health problems, is not effective enough to justify the costs, and has a dosage that cannot be precisely controlled throughout the water distribution system.1,2,3 Proponents point to reduced cavity rates among children, but several European countries have seen cavity rates stay the same or decline after ceasing fluoridation in water supplies. Additionally, some argue that children who do not have regular dental check-ups or brush their teeth with toothpaste containing fluoride, more typically in poverty stricken areas, benefit from a fluoridated water supply.

Water fluoridation is still used in the U.S., U.K., Ireland, Canada, Australia and a handful of other countries. By contrast, the nations below stopped fluoridating their water and are listed with the years they practiced fluoridation:

In the Netherlands, water was fluoridated in parts of the country from 1960 to 1973, at which time its Supreme Court decided authorities had no legal basis for adding chemicals to drinking water if they did not also improve safety. It was also stated that consumers did not have the option of choosing a different tap water provider.9

In favor of fluoride

Still, the American Dental Association calls water fluoridation "one of the safest and most beneficial, cost-effective public health measures for preventing; controlling; and, in some cases, reversing tooth decay." Health Canada supports fluoridation, citing international scientific reviews that indicate "…no link between any adverse health effects and exposure to fluoride in drinking water at levels that are below the maximum acceptable concentration of 1.5 milligram/liter (mg/L)." According to the World Health Organization (WHO), fluoridation is an effective way to prevent tooth decay in poor communities: "In some developed countries, the health and economic benefits of fluoridation may be small, but particularly important in deprived areas, where water fluoridation may be a key factor in reducing inequalities in dental health."

More on fluoride: Contaminant of the Month: Fluoride and fluoridation

The only known adverse effect at the dosage recommended for water fluoridation is dental fluorosis, which causes bright white spotting on the tooth surface in children. The condition is only cosmetic and unlikely to represent any other effect on public health. Some countries still choose water fluoridation as a method to reduce cavities in both children and adults.4

More adverse effects come when fluoride occurs naturally above recommended concentration levels. These include severe dental fluorosis, skeletal fluorosis (which causes pain and damage to the joints) and weakened bones.5 The WHO’s recommendation of a maximum 1.5 mg/L fluoride value is still being debated.6 In fact, in April 2015, the U.S. Department of Health and Human Services lowered its recommended dosage of fluoride in drinking water to 0.7 mg/L for the whole country. The change was the first since 1962 when the federal government suggested up to 1.2 mg/L in cooler climates and 0.7 mg/L in warmer areas where people consume more water.

In rare cases improper implementation of water fluoridation can result in over-fluoridation that causes outbreaks of acute fluoride poisoning, with symptoms that include nausea, vomiting and diarrhea. Three such outbreaks reported in the U.S. between 1991 and 1998 were caused by fluoride concentrations as high as 220 mg/L. In a 1992 Alaska outbreak, 262 people became ill and one person died.8 Then in 2010, approximately 60 gallons of fluoride were released into the water supply in Asheboro, North Carolina, in 90 minutes — an amount intended to be released in a 24-hour period.

Not all water filtration technologies, including carbon-based products, will remove fluoride from water. Proven methods for removal include reverse osmosis, activated alumina, deionization and distillation, but deionization and distillation are generally not best for home applications because of the space required and cost. Deionized water is more suitable for industrial, laboratory and other uses because it strips all minerals from the water and leaves a taste most find objectionable. Distillation’s larger footprint and energy requirements can make it impractical, and many people think the taste too flat as well.

The fluoride controversy will likely continue for many years to come. As more empirical data emerges, hopefully more of a consensus will be reached, but people will likely remain on both sides of the fence for the foreseeable future. In the meantime, for those that would rather avoid it, developed and tested water technology can control the fluoride content of the water entering their own homes.

Mark St. Hilaire is the president of H20 Care Home in Middleton, Massachusetts. He is a master plumber who discovered a passion for water treatment early in his career. He started solving challenging water problems more than 25 years ago when he founded AquaTech Water Systems in 1989. St. Hilaire merged his company with Atlas Water Systems in 1999. He managed the growing Residential Systems Division for Atlas until he purchased the group and founded H20 Care Home in 2014.

Norm Marowitz has been in the water filtration industry for more than 20 years. Most recently he was the president of Region-X Inc., an RO membrane cleaning and DI resin regeneration facility based in Taunton, Massachusetts, which was acquired by Quench. Prior to this, he was the president of Atlas Watersystems Inc. based in Waltham, Massachusetts, which was acquired by Quench, USA in June 2014. His other previous experience includes practicing as a CPA and management consultant as well as senior management positions in other industries. Having graduated from Boston University with a BSBA degree, he also completed his MBA at Boston College.