The benefits of harvesting HVAC condensation

How to keep good water — and good money — from going down the drain. 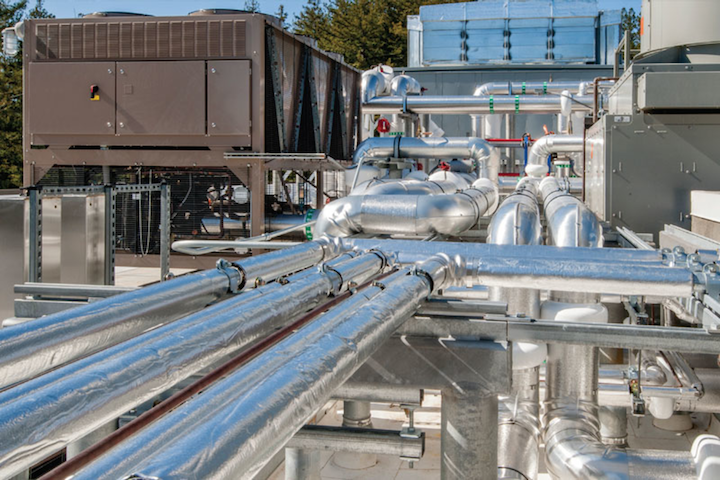 It is a typical, muggy August afternoon in Houston, but Erik Knezevich, P.E., is feeling super-chilled. The former Rice University facilities project manager is standing inside the massive air conditioning unit that cools Brockman Hall for Physics on the north end of campus. The incoming air registers a toasty 88 degrees, but in the instant it takes for it to blow through water-chilled air conditioner (A/C) coils and reach him, it is decreased more than 30 degrees — cold enough to travel inside the building’s ductwork and keep labs, classrooms and offices comfortable.

Anyone who knows Houston understands that high temperatures are just part of the reason air conditioners run feverishly nearly year-round. Couple an average August thermometer reading of 94 degrees with an average relative humidity of 75 percent, and it is easy to see why "air you can wear" is not just a meteorologist’s fanciful turn of phrase for residents of the Bayou City. Under those combined conditions, sweat drenches people, and condensation nearly pours off A/C coils. On a hot, humid day, the amount of condensate produced from the Brockman Hall A/C system equals an astonishing 15 gallons per minute.

In many Houston buildings, HVAC condensate is discarded, simply sent down the sewer. However, at Rice University, a long history of environmental stewardship makes that kind of waste unacceptable.

Instead, the condensate from Brockman Hall and six other buildings is captured and pumped back for reuse on campus, primarily as makeup water for the central plant’s cooling towers. Knezevich figures that Rice recovers about 14 million gallons of water per year, and that is probably a conservative estimate. That means that instead of buying 14 million gallons of treated, potable water from the city to replenish its cooling towers or tapping the university’s own well, Rice saves a precious resource and a considerable amount of money.

"If you have a pipe going from the attic to the basement in an existing building, you’re going to rip up too much of the structure to justify the return on investment," he says.

In addition, the reused condensate does not totally replace the water required by the cooling towers. Some fresh water will still be needed. According to a report by the San Antonio, Texas, Water System, the figure typically ranges from as little as 5 percent to as much as 45 percent with the latter figure reflecting a high-ventilation building such as a laboratory.1 At Rice, the total cooling tower makeup water for the university is about 68 million gallons per year, so the recycled amount represents about 20 percent.

Knezevich, who now operates Galaxy Consulting Engineers, expects that as construction continues on campus, condensate harvesting will be part of the plan. Water recovery, he explains, is part of Leadership in Energy & Environmental Design (LEED) certification — which is administered by the U.S. Green Building Council (USGBC), the benchmark in green building — and Rice is aiming for the LEED Silver level.

As he notes in a YouTube video that promotes Rice University’s condensate recovery efforts, using HVAC condensate instead of potable water in cooling towers is, "putting good water to good use." 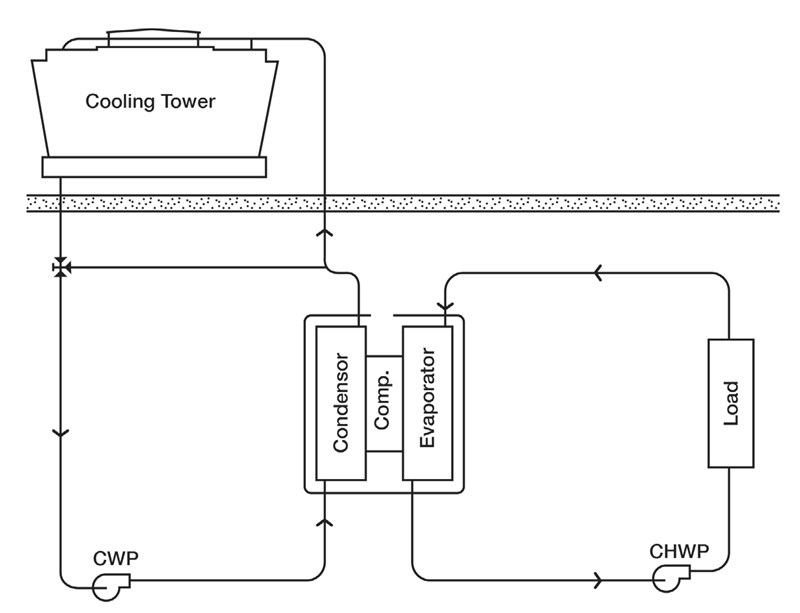 In a typical cooling tower system, the cooling tower circuit is called an open loop since the cooling water and air mix. The chiller loop, which goes from the chiller to the air handler, is a closed loop; no air and water mix. The two loops do not merge or mix and are completely separate.

Image Courtesy Of Graphic based on diagram courtesy of Puckorius & Associates Inc.

Condensate is considered good water — as pure as distilled water, low in mineral content, and can be used for a number of applications in addition to cooling towers. Paul Puckorius, a 55-year veteran of the water treatment industry who runs Puckorius & Associates Inc., outside Denver, ticks off a few: irrigation; ornamental fountains and ponds; industrial process makeup; and even flushing toilets, if filtered and disinfected first. That precaution is necessary, he says, because toilet water can spray like an aerosol, which could expose people to Legionella bacteria. The same risk applies when HVAC condensate is used in lawn sprinklers, although this hazard is not associated with drip irrigation.

E.W. Bob Boulware, P.E., author of Alternative Water and Wastewater Management System and president of Design-Aire Engineering, Indianapolis, adds that condensate can also be used in swimming pools if biocide is added and even for potable water if steps are taken to reduce the risk of Legionella and other forms of biological contamination. In that case, treatment would include disinfection with ultraviolet light, chlorine tablets, ozone injection or raising the water temperature to at least 140°F.

Although the presence of Legionella, even at low levels, is a concern, higher levels are particularly unsafe. Boulware explains that most natural sources of water are not infective, but can become problematic when an amplifying device, such as an air conditioner, is present. Contamination of air conditioning condensate by Legionella is so common that kits are commercially available for adding to the condensate to inhibit microbial growth, he says.

Although harvesting condensate from large commercial HVAC systems is not new, USGBC LEED certification is driving renewed interest in it. These days, being green is imperative from a marketing and public relations standpoint, but that is not the only motivation for building owners. Green buildings result in some serious economic benefits when compared to their conventional counterparts, consuming 36 percent less energy according to the USGBC. U.S. buildings consume about 14 percent of all potable water, or 15 trillion gallons, annually2; with water and sewer rates up about 45 percent since 20103, the potential savings associated with replacing costly, treated water with free, clean condensate are substantial.

For example, one study estimated that expenditures for water and sewer services in the U.S. federal sector alone are as much as $1 billion annually. Through moderate gains in total water efficiency, presumably including condensate harvesting, the federal government could save as much as $240 million per year.4

Condensate recovery can help building owners achieve highly desirable LEED credits. But USGBC is far from the only organization on the condensate harvesting bandwagon.

The American Society of Heating, Refrigerating and Air-Conditioning Engineers (ASHRAE) promotes what it calls "sustainable technology" for high performance green buildings. In 2010, ASHRAE adopted a standard for condensate collection and reuse for construction and major renovation projects with HVAC units greater than 19 kilowatts (65,000 British thermal units per hour)5.

Condensate recovery is also included in the International Code Council’s International Green Construction Code, which is expected to make buildings more efficient, reduce waste, and have a positive impact on health, safety and community welfare. Major plumbing codes incorporate condensate recovery criteria, and in 2016, the Texas Commission on Environmental Quality drafted new rules for the beneficial reuse of gray water and alternative on-site water including condensate. In major cities, such as Denver and New York, utilities require the use of condensate for cooling towers and other processes.

Saving 14 million gallons of water, like Rice University does, is a pretty lofty goal. Can everyone who implements an HVAC condensate recovery program expect the same kind of results? And how long will it take to recoup the investment in condensate recovery equipment?

The last factor can be a bit difficult to measure, although some general guidelines are available. For example, in Alternative Water and Wastewater Management System, Boulware proposes this equation for estimating how much cooling coil condensate will be generated by an HVAC system operating at peak design condition: 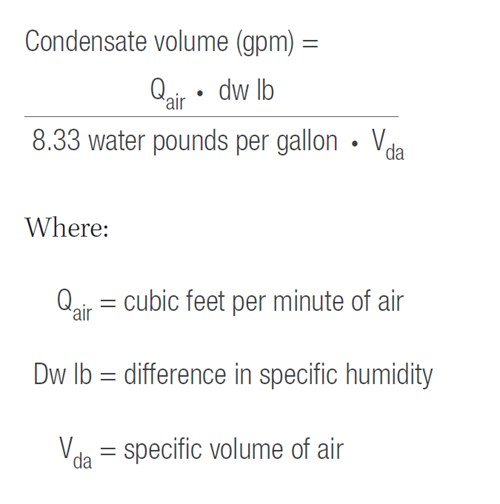 Using this equation, Boulware calculates that an office building in Dallas, with 1,350 to 1,580 equivalent full load cooling hours and an interior air handling load of approximately 1.5 watts per square foot, would produce approximately 1,068 gallons in condensate.

As for the return on investment, when Karen Guz, director of conservation, San Antonio Water System, studied buildings in the city, she found that they produced condensate at an hourly rate between 0.1 and 0.3 gallons of water per ton of cooling. As a result, she determined that condensate recovery systems made economic sense for buildings larger than 100,000 square feet.

Dallas and San Antonio, like Houston, are humid climates where more condensate is produced. However, Puckorius does not rule out the economic benefits of condensate recovery for buildings in arid environments or places in which drought-like conditions make every drop more valuable.

"Water-cooled chillers are used to provide air conditioning because they’re more energy efficient, but operating a cooling tower requires a tremendous amount of water," Puckorius says. "And the facility is being charged both for the fresh water coming in and for treating the wastewater that goes out. In the past, energy costs were higher than water costs, so water use wasn’t as much of an issue. But with the price of fresh water going up and up, the cost of a condensate gathering system can easily be o set by the water savings."

What is the price tag for a condensate recovery system? It can vary from a couple hundred dollars to many thousands — depending on the design and how much piping is required to reach the cooling tower. The cost of converting the cooling towers also varies. Knezevich explains that at Rice, they were able to tie into the south campus utility plant, so there was no expense.

The next step is fairly simple math: multiply the number of gallons of condensate produced by the cost of water. This gives you an annual savings that you can compare against the cost of adding and maintaining the condensate recovery system.

In a city like Houston, the payback takes as little as one year, Puckorius says. Even if the return took twice that in a city like Phoenix, it would be worth it.

With proper planning, HVAC condensation recovery can bring numerous benefits to building owners and managers including alignment with LEED and other green initiatives. Most of all, for businesses looking to rein in their fresh water use, harvesting and reusing condensate can keep good money, like good water, from going down the drain. 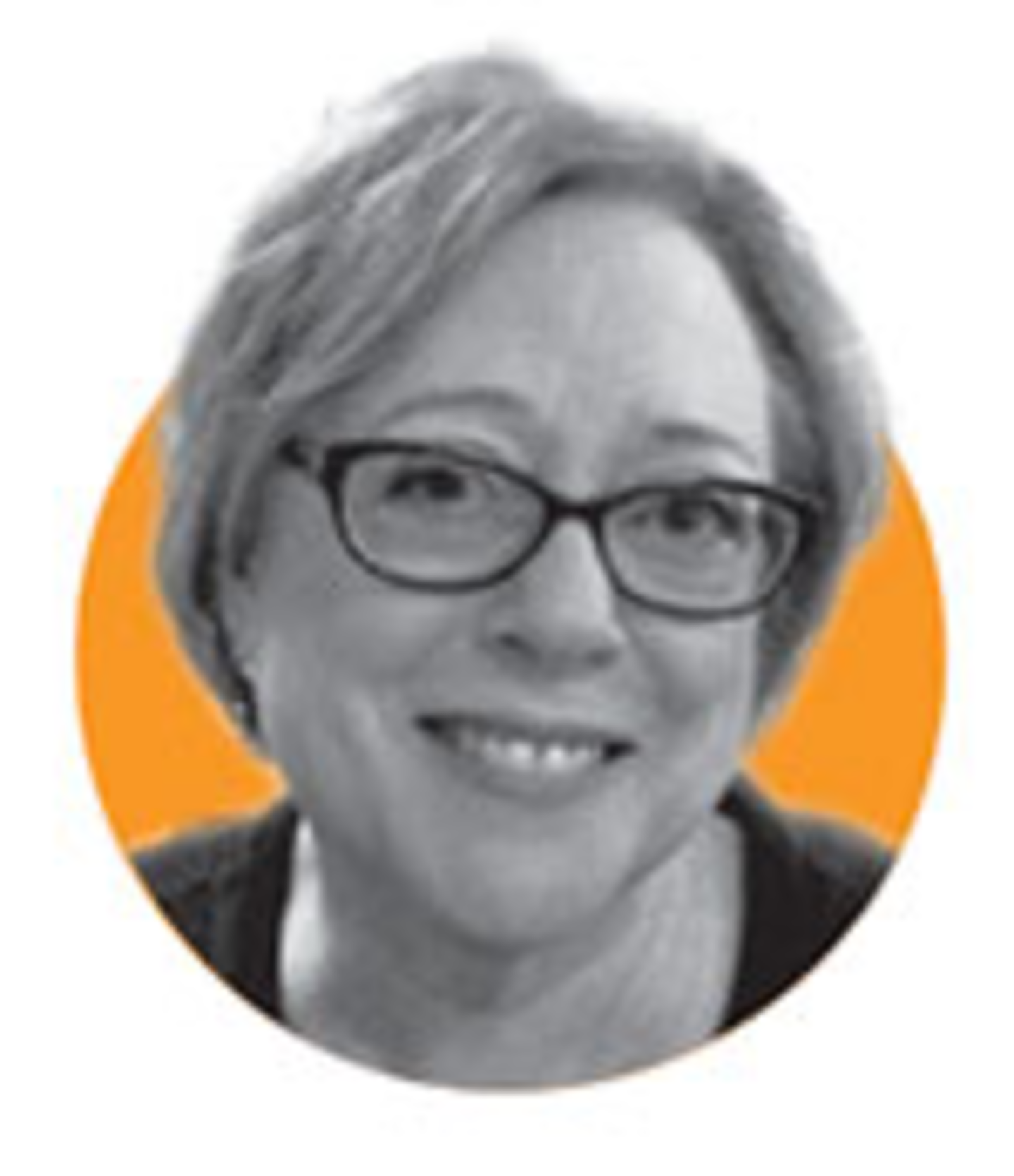 Barbara Belzer Adams has written about industrial, energy and scientific topics for more than 25 years. She lives in Houston.