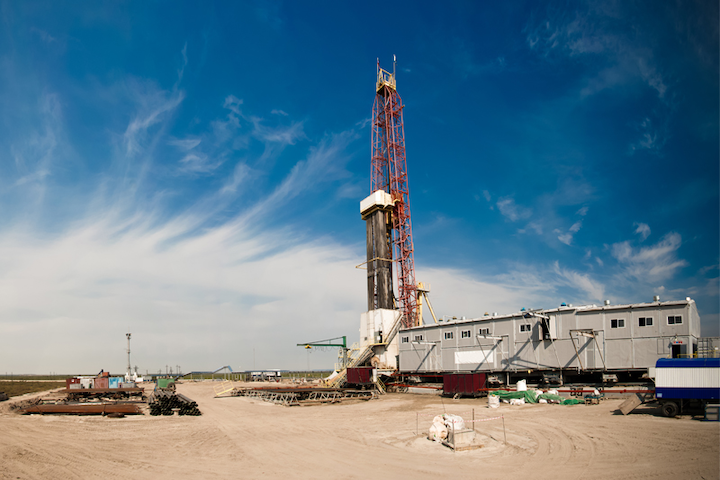 Produced water is a byproduct of oil and gas production — the associated water that is produced along with oil or gas during normal production operations. Generally, it includes formation water, condensation water and reproduced injection water. It may also include water used for desalting the oil during production.

Produced water is a complex mixture and has wide variations in composition within and between fields, as well as with the age of fields. The following produced water composition parameters are often referenced:

Soluble organics: naphthenic acids, carboxylic acids and phenols. These can be present in both dispersed and dissolved form, depending on the pH of the water.

Worldwide, it is estimated on average that for every barrel (bbl) of oil produced, there are roughly four to five barrels of water coproduced. Because of this, oil companies have sometimes been referred to as water companies within the oil and gas industry.

In the North Sea, official figures from OSPAR Commission confirm that, on average, 7.1 million bbl of produced water was produced every day in 2014. The water-to-oil ratio in the North Sea in 2014 was roughly about 2.3 bbl water per 1 bbl of oil. 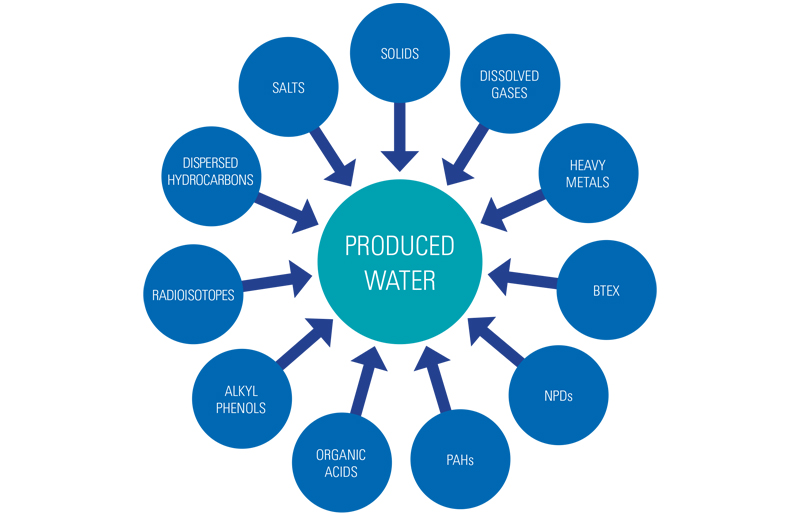 Produced water is inevitable in oil and gas production. The question is how to best manage this water so that oil and gas can be produced in an economically viable, socially responsible and environmentally sustainable manner.

Management of produced water varies with operators, geographical locations and field history, but some considerations include:

A good produced water management practice would involve different disciplines — including reservoir engineers, production engineers, chemists and environmental engineers. It would also use an integrated approach, taking into consideration the aforementioned options, as well as the anticipated production history and profile.

In recent years, there has been a revolution in shale gas and shale oil production using hydraulic fracturing. This revolution has made the U.S. the largest producer for both natural gas and crude oil.

The distinction between flowback water and produced water can be subjective. But in general, flowback water is less saline and contains chemicals that are used as part of hydraulic fracturing fluids. There is much less water produced from shale oil production compared to that from conventional oil production.

In the U.K., shale gas and oil exploration and production are at a relatively early stage. TUV SUD NEL published a review of flow- and water-related issues, which was aimed at accelerating safe and responsible developments of U.K. shale gas and oil resources.

In the North Sea, the monthly average of oil in discharged produced water must be less than 30 mg/L, with a minimum of 16 samples taken at equal time intervals as demanded by OSPAR.

In the U.K., at least two samples are taken at equal time intervals per day. The measurement method for oil in water for regulatory reporting is the OSPAR GC-FID (Gas Chromatography and Frame Ionization Detection) method, which is a modified version of the ISO 7377-2 method. From 2012, a risk-based approach (RBA) was introduced and implemented. The ultimate aim for OSPAR is to achieve a target in which discharge of produced water would cause no harm to the marine environment.

In the Gulf of Mexico, the discharge standard is 29 mg/L monthly average and 42 mg/L daily maximum. Samples for oil and grease monitoring should be collected and analyzed a minimum of once per month. In addition, a produced water sample should be collected within two hours when an oil sheen is observed in the vicinity of the discharge or within two hours after system startup if it is shut down following an oil sheen discovery, and then it should be analyzed for oil and grease. Oil and grease are measured by the U.S. Environmental Protection Agency (EPA) method 1664.

On average, 75 percent of the produced water offshore is discharged, with the rest being reinjected. Roughly 90 percent of this produced water is reinjected for pressure maintenance or disposal. With the rapid development of shale oil and gas and the demand for water for hydraulic fracturing, there is an increasing emphasis on flowback and produced water reuse. 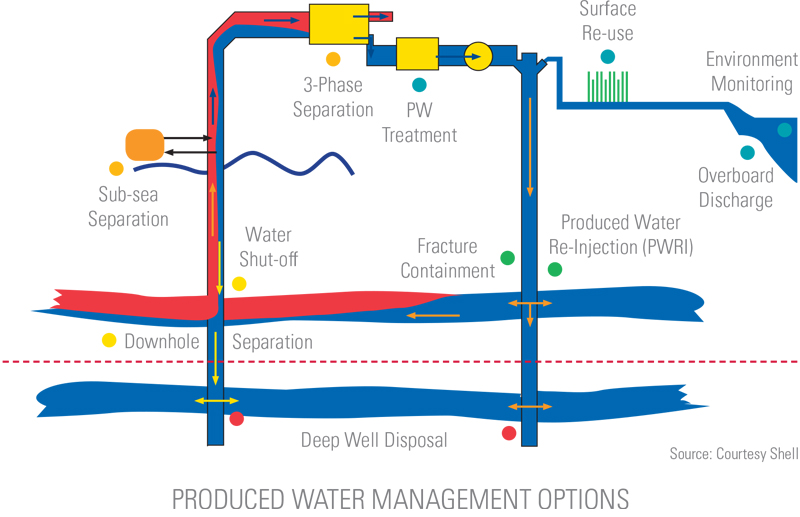 With increasing water production from mature fields, diminishing readily produced oil and more stringent environmental regulations around the world, the industry is increasingly looking into:

However, for each of these options, there are challenges in produced water handling and management. For subsea separation, regardless of whether the separated produced water is discharged or reinjected, water quality must be determined. Yet, there is a significant technology gap in online, continuous oil-in-water measurement technology.

While chemical EOR is well-practiced for onshore, significant challenges remain for offshore operations. This is particularly the case for the effective treatment of the returned produced water to meet discharge or reinjection standards. As for the development of unconventional oil and gas, reuse of flowback water and produced water is increasingly emphasized. Reuse of produced water requires the removal of not only organic compositions, but also TDS. Development of more cost-effective treatment technologies is therefore needed.

In addition to technical issues, the industry also faces challenges in relation to cost reduction under a volatile oil price environment and a shift toward a nonfossil-based cleaner energy.

Management of produced water is crucial in prolonging oil and gas production and maximizing total recovery from a particular field. As the discharge of produced water is strictly regulated, good produced water management will need to involve several disciplines and use an integrated or holistic approach. In addition to using oil in water as a parameter for compliance monitoring, RBA has been introduced and implemented. 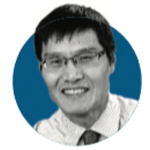 Ming Yang is a principal consultant at TUV SUD NEL, a provider of technical consultancy, research, testing and program management services. Part of the TÜV SÜD Group, TUV SUD NEL is also a global center of excellence for flow measurement and fluid flow systems and is the U.K.’s National Measurement Institute for Flow Measurement.

A report by Future Market Insights shows the global produced water treatment system market’s growth is due to the demand from the oil and gas industry.
Aug 19th, 2019