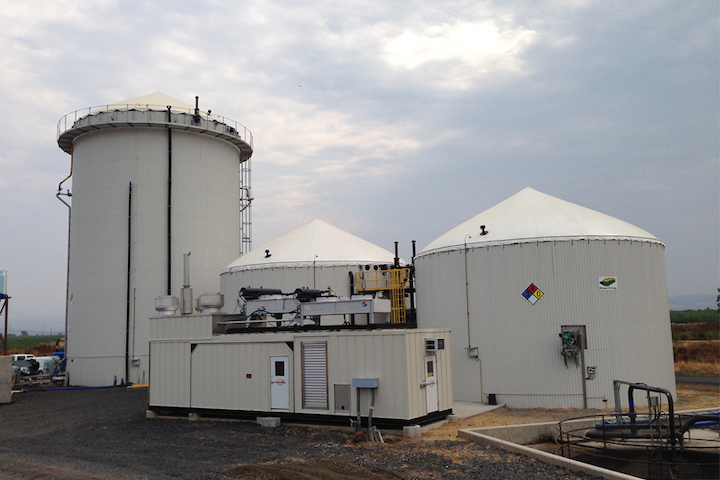 While there are anaerobic digestion (AD) plants in all 50 states in the U.S., the total number of biogas sites is approximately 2,200. Meanwhile, in Europe there are over 10,000 operating digesters.

According to the American Biogas Council, there are more than 13,500 new sites in the U.S. ripe for development today — from farms, wastewater treatment facilities and food waste plants to landfills.

With so much available feedstock that could be used for electricity or valuable digestate for fertilizer, it is imperative to have the right equipment in place to process it.

One of the most crucial elements is the digester’s mixing system, especially with a wide range of feedstock. Getting the mixing system right and the biogas plant in good shape to perform as it should — low on maintenance and low on energy costs — and mixing all of the digester can produce the best possible biogas yields.

In California, AD facilities have taken their biogas production to a much higher level. The following case studies provide examples of biogas optimization. 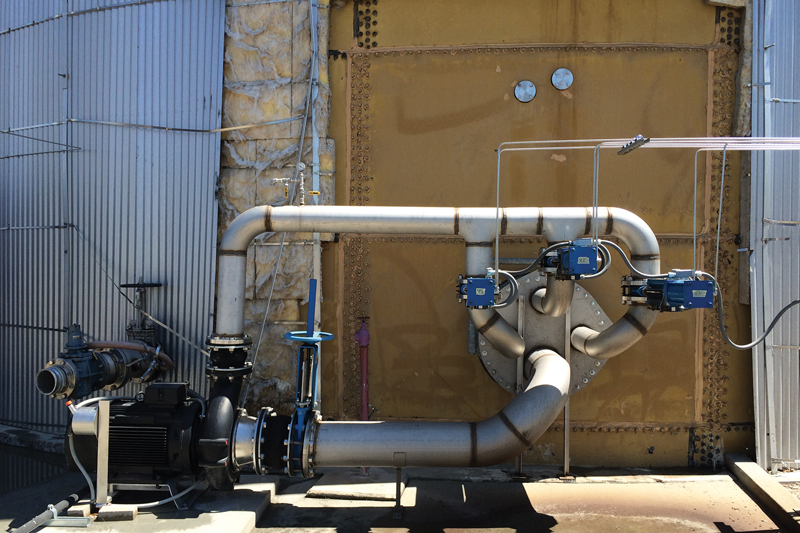 Landia’s GasMix system features a chopper pump with no moving parts inside the digester.

Landia’s GasMix system features a chopper pump with no moving parts inside the digester.

Landia worked with full-service project developer, Biogas Energy, who was looking for ways to cut costs, secure new waste supply contracts and improve wastewater treatment.  Creating its own on-site biogas facility alongside a rendering plant was a natural fit.

Biogas Energy had prior experience with submersible mixers in anaerobic digesters, but one of the main issues with submersible digester mixing systems was the equipment inside the tank. Having to lift the mixers out for repairs was proving onerous. Opening the digester also created potentially serious health and safety issues. Learning from experience, the developer went a different route for the NSR AD system.

From the reception area, the material is pumped into two tanks (40 feet in diameter and 24 feet high), where the first acid-forming phase of the biogas production process occurs.

The digester is mixed by an externally mounted Landia GasMix system, which includes the Landia chopper pump design invented by the company in 1950.

When the chopper pump is running, thick liquid from the bottom of the tank is drawn into the pump where all solids are chopped. This accelerates the digestion process, and it prevents clogging of pipes and nozzles.

Even during commissioning, when the AD biology was at a delicate stage, Biogas Energy was able to carry out some tweaks without any interruption to the biogas production process. With submersible mixers, operators would need to start over again, which would have been expensive and labor-intensive.

The AD facility is designed to process a wide range of feedstock, so the pumps and mixers must be robust. Comprising two 30-horsepower (hp) chopper pumps and a self-aspirating system that reduces solids to produce more methane in a shorter time period, the Landia GasMix system (designed specifically for AD/biogas) is easy to regulate and offers energy savings because it only needs to run for a maximum of 30% of the installed capacity.

Enough electricity was generated to power the entire NSR plant, while heat from the generator was also used to heat the digesters, optimizing energy efficiency. 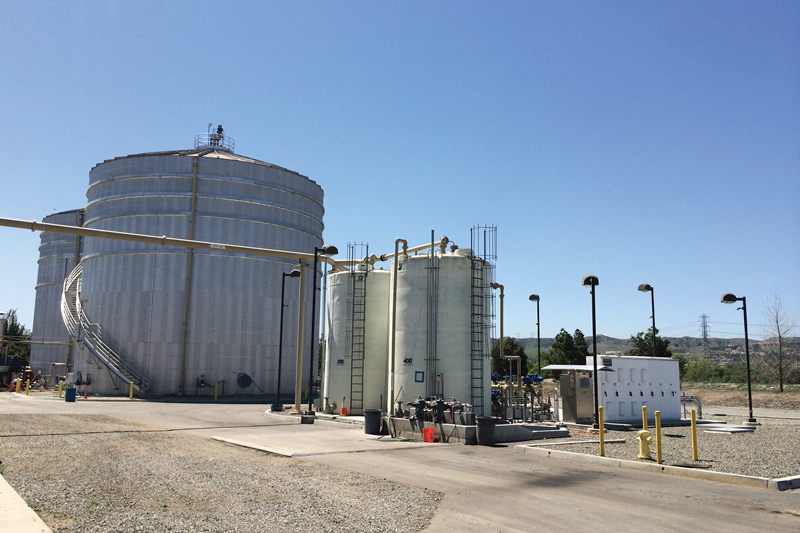 As another example in California, over 500 miles south, Landia chopper pumps at a food waste-to-energy facility have helped boost gas production from two anaerobic digesters.

The Chino-based facility, 40 miles east of Los Angeles, is capable of converting up to 200,000 gallons of liquid food waste per day to renewable energy. It has four 15,000-gallon tanks that receive macerated commercial food waste from various sources. For the past 10 years, each tank has been served by a stainless steel Landia chopper pump that continuously reduces particle sizes and recirculates the tanks. The biogas plant began operating with top-mounted propeller mixers on the digesters; however, this mixing system was proving insufficient.

Since California is a large dairy state, the site previously took in a large volume of farm slurry. But as many of these dairy facilities closed, so did the treatment plant for three years. After the reopening, ES Engineering took over the plant operation and soon realized there was room for improvement with the digester mixing.

The company’s co-owner, a waste management business, had several large contracts with grocery stores and food producers for unwanted or expired products, so it was important to maximize this large supply of feedstock with the right mixing system. Feedstock varies from 10,000 gallons per day to as much as 200,000 gallons per day.

Using the Landia chopper pump, all chopping is completed before the liquid enters the pump housing, which reduces wear on the pump casing, impeller and sealing system. 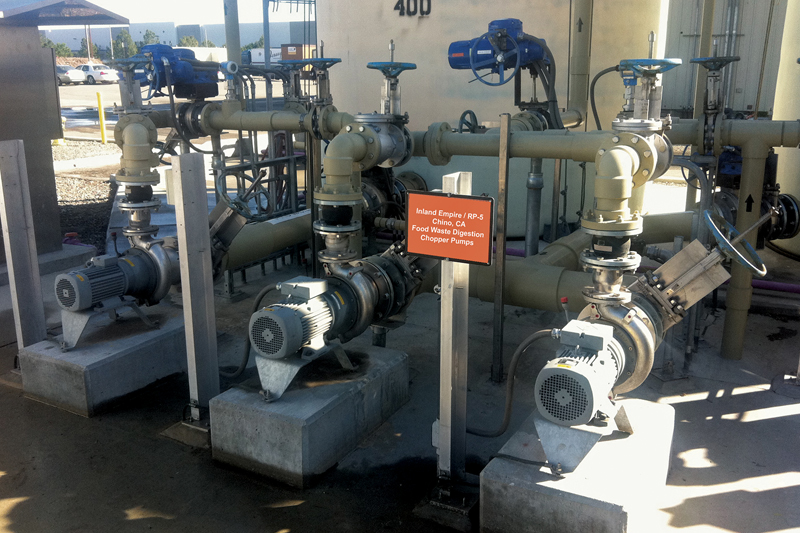 Similar to the case at Oroville, one of the advantages of the Landia GasMix system is that all mechanical components are externally mounted, which allows inspection and maintenance to be completed without needing to enter or open the digester. In addition to health and safety advantages — as well as no requirement for breathing apparatus or working at high heights — servicing the Landia GasMix system can be completed while biogas production is uninterrupted.

Also, pipework is also usually mounted on the outside of the digester, but to suit ES Engineering’s requirements for no further holes made in the wall of its insulated digesters during the retrofit, all stainless steel pipework was installed through existing manways.

An immediate difference was seen in the increase in biogas production. Powerful mixing performance is ensured in all areas of the tank by one or more ejector-type nozzles and hydraulic mixing nozzles.

One year after installation when it was time to drain down the other digester for a service, the facility upgraded the mixing system in the second digester to the Landia GasMix. The organic matter converted to methane by the two digesters produces 3.3 megawatts (MW) of electricity. This was enough to power equipment on-site and sell surplus power to the grid.

Previously, operators could see floating matter on the top layer of the liquid, but all of the scum was broken down, and the whole tank was being mixed thoroughly.

Like Oroville, this upgrade at Chino to a mixing system designed for purpose can make a difference to the operation of a biogas plant. Successful installations with the right equipment, especially the mixing system, can help the U.S. push ahead with more biogas plants. 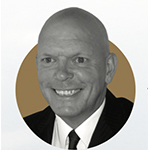